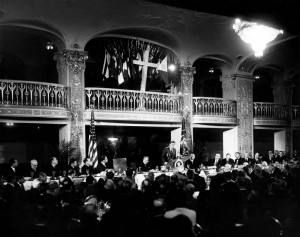 On February 5, 1953, over 500 members of the nation’s governing elite crowded into the grand ballroom at the Mayflower Hotel for the first National Prayer Breakfast. The recently inaugurated President Dwight Eisenhower echoed the event’s theme — “Government Under God” — in his remarks, in which he asserted that “all free government is firmly founded in a deeply-felt religious faith.”

Sixty-three years later, Barack Obama used his speech at the National Prayer Breakfast Thursday to make a case for inclusion, tolerance, and an embrace of all faiths — showing just how far this strange and relatively recent American tradition has come since its founding.

When the breakfast began in 1953, it was part of a major cultural shift signaling the widespread embrace of Christianity in American politics. The event was sponsored by the International Council of Christian Leadership (now known alternatively as The Fellowship or The Family), complete with explicitly Christian themes and various members of the cabinet, judiciary, and Congress coming together to sing Christian hymns such as “Onward, Christian Soldiers.” Evangelical titan Billy Graham, noting the enthusiastic marriage between government and Christianity, said the first breakfast “could very well be the turning point in Western civilization.”

Chief Justice Earl Warren ended his address before the second prayer breakfast in 1954 by saying that “no one can read the history of our country without realizing that the Good Book and the spirit of the Savior have, from the very beginning, been our guiding genius.” He concluded, “We are a Christian nation.”

“In its early days, it really was a wholly Christian endeavor,” historian Kevin Kruse told Mediaite. “It became more truly ‘Judeo-Christian’ in later decades and more recently, has embraced a broader diversity of faiths.” Kruse is the author most recently of One Nation Under God, which explores how the notion that the U.S. is a “Christian nation” derives not from the Founding Fathers, but from corporate and religious interests in the mid-20th century. Like much of the “ceremonial deism” speckled throughout American politics and culture, the breakfast emerged during the same time period which saw the words “under God” added to the Pledge of Allegiance, and “In God We Trust” accepted as the official motto of the country (even though a 1955 report from Library of Congress researchers concluded that “E Pluribus Unum” had a much stronger case).

Lyndon B. Johnson used the occasion of his 1964 speech to stress the importance of the separation of church and state, even as he stressed the importance of faith in those holding public office. “We who hold public office are enjoined by our Constitution against enacting laws to tell the people when or where or how to pray,” he said. “All our experience and all our knowledge proves that injunction is good. For, if government could ordain the people’s prayers, government could also ordain its own worship — and that must never be. The separation of church and state has served our freedom well because men of state have not separated themselves from church and faith and prayer.”

In his first breakfast speech in 1969, Richard Nixon affirmed the value of prayer during “days in which religion is not supposed to be fashionable in many quarters” and “skepticism and even agnosticism seems to be on the upturn.” Though he later told an aide privately that he had been placating the crowd with some “church stuff.”

Kruse noted that the even as the event had diminished in actual cultural impact, an aura of tradition has accrued around the breakfast, making it somewhat sacrosanct. “Presidents are expected to attend, but it’s become just one more annual ritual in a calendar littered with them. It once held real meaning, but now it’s purely ceremonial,” he said. “Today, it’d be taken as some sort of violation of tradition if a president missed it, but that’s not how it was intended to be,” he said, noting that even Eisenhower missed a couple.

Billy Graham, speaking in 1955, implied that the Roosevelt and Truman years were a period of “spiritual drought.” But for the most part, in its early years, the breakfast steered clear of political issues, and only gradually became an occasion to lob partisan attacks. Under Ronald Reagan, the breakfast became much more of a venue for promoting issues central to the Religious Right agenda, such as prayer in public schools and abortion. Bill Clinton used the breakfast as an occasion to chide his critics, saying in 1994, “Sometimes I think the commandment we most like to overlook in this city is ‘thou shall not bear false witness.'” And in 1998, Clinton asked the audience for their prayers so that he could survive the scandals plaguing his administration and “take our country to higher ground.”

And in an interesting recent reversal, rather than using the breakfast to pursue his agenda, the president found himself sitting on the receiving end of a strident political attack. Dr. Ben Carson launched his political career with a speech at the 2013 breakfast, blasting Obamacare and political correctness, and comparing America to ancient Rome in its last days, caving under “moral decay” and “fiscal irresponsibility.”

“In the end,” Kruse observed, “an event created in the 1950s to bring Americans together ironically became as polarized as the rest of our politics.”

House Speaker Paul Ryan sounded a partisan note Thursday when he decried what he described as “a growing impatience with prayer in our culture.” Specifically, he seemed to take aim at the recent New York Daily News cover, which blasted Republican lawmakers for offering “hopes and prayers” in the wake of mass shootings, but obstructing any efforts to pass gun control legislation. “The thing is, when you are praying, you are doing something about it,” Ryan said.

But if the event has grown more political, it has become less explicitly Christian. Far from asserting that America is a “Christian” nation, the breakfast Thursday (Obama’s last) emphasized a multitude of faiths, and the importance of tolerance and diversity. In her remarks, House Minority Leader Nancy Pelosi invoked the Prophet Mohammad, the Torah, and the Gospel of John all in one breath. “The command of love,” she said, was “not confined to the New Testament.”

“I pray… that our differences ultimately are bridged. That the God that is in each of us comes together and we don’t divide,” Obama said.