Let Me Be Clear: Media Repeats Itself More Than Obama

Let Me Be Clear: Media Repeats Itself More Than Obama 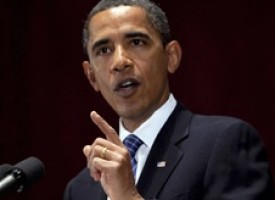 The Washington Post is running an article this weekend about Barack Obama‘s favorite locution “Let me be clear.” If this story seems somehow how familiar to you, its because you might recall reading a very same story, as told by the Associated Press in October. Or, maybe it was the the Politico version that ran in August. Turns out that the only concept more hackneyed than Obama’s use of “let me be clear” are news reports about Obama’s use of “let me be clear.”

Alec MacGillis and Paul Farh file a report for the Washington Post piece titled “In Obama’s speeches, one favorite phrase: ‘Let me be clear'”

Whether President Obama’s upcoming State of the Union address focuses on jobs, health care, foreign policy or something else entirely, there is one thing we can count on: Obama will make himself absolutely clear.

All politicians have their verbal tics — say, John McCain’s “my friends” — but few resort to their crutches as often as Obama relies on his “let me be clear” set-up. He deploys it in formal speeches as well as in impromptu remarks, meaning that the White House speechmakers have keyed in on the boss’s security blanket.

Back in October, the AP effectively ran the same story by Ben Feller under the title “President Obama’s Favorite Words: ‘Let Me Be Clear'”:

For all his flourish, President Barack Obama sure falls back on a few familiar phrases.

Make no mistake. Change isn’t easy. It won’t happen overnight. There will be setbacks and false starts.

Those who routinely listen to the president have come to expect some of those expressions to pop up in almost every speech. (That includes you, cynics and naysayers, the ones Obama mentions all the time without identifying who is saying nay.)

From whence did all this come? Perhaps is was Andie Coller, writing for Politico in a piece entitled “Dissecting President Obama’s favorite phrase:”

In the first six months of Obama’s presidency, this simple sentence has gone from political pet phrase to full-on rhetorical signature, appearing (along with its variants “let’s be clear” and “I want to be clear”) scores of times in the commander in chief’s pre-written and extemporaneous remarks – sometimes more than once in a given speech.

But what does he mean when he says it? And why does the president who made “transparency” a national buzzword use it so often?

So what can we learn from all of this? Yes it is true that President Obama repeats “let me be clear” to a sometimes annoying degree. But the media seems to also guilty of doing the same.