Let’s Imagine Watching a WSJ Reporter Ask Hillary: ‘Can I Ride on Your Lap?’
The Bad Touch

Let’s Imagine Watching a WSJ Reporter Ask Hillary: ‘Can I Ride on Your Lap?’ 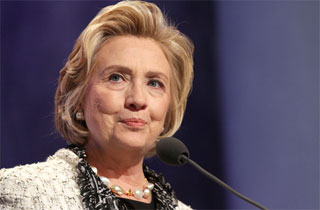 In the hours left until Memorial Day Weekend commences, let us briefly stop poring through Hillary Clinton‘s email servers for damning Benghazi-related emails. Let us, instead, pore through her servers to find emails of hilarious things, like her staffers describing a reporter pulling some intimate moves on the Secretary of State.

To set the scene: in October of 2012, shortly after a raid on the American embassy in Benghazi left U.S. Ambassador J. Christopher Stevens dead, veteran journalist Monica Langely conducted an interview with Clinton for The Wall Street Journal––probably this one––about the attacks. (Yes, it’s tangentially related to Benghazi. We know. Just stay with us.)

Shortly after the interview wrapped up, on October 11th, a group of high-level State Department officials got together in an email thread to go OMG OMG OMG over Langely’s predatory behavior. “[S]he was her usual wacky self and pulled one move that I can’t even describe,” wrote State Department adviser Phillipe Reines.

State Department Communications Director Caroline Adler prefaced the story with “This will be exciting when it’s FOIA’d”:

HRC. Monica, have a seat
::HRC motions toward a chair situated an appropriate distance from her preferred spot on the couch::

Monica: ll!!Sure!!!
::Monica proceeds to drag her chair within inches of the Secretary –leaning in even further::

Interview proceeds… and about midway.

Monica: ::leaning in further::
Oh Hillary…what do you eat? drink? dream about when you sleep?
::Monica again touches HRC’s leg::

::Everybody laughs awkwardly — Philippe hardly able to contain himself::

Monica: They think I’m so funny (looking at Philippe and me.) HILL, can I ride on your lap to the White House?

…this went for about 51 minutes And I agree with Philippe- whatever she does, it works. It was a really great interview.

Reines, cc’ing Clinton, went on with a description of something that, if presented on Sesame Street, would be used as an example of Stranger Danger:

Tom, she moved that yellow chair as close as it went. Knee to knee. Amazed she didn’t try knee in between knee. And if that wasn’t enough, she leaned forward. More like a pivot, as far as her torso could fold forward to minimize the space between their heads. Was like the dental hygienist rolling around the floor to get the best access to your mouth depending on what tooth she was trying to get access to I’ve never seen a Westerner invade her space like that And even the non Westerners I’ve seen do it based on cultural differences have been only briefly to greet, This went on like that for 51 minutes – unacceptable in any culture. I don’t even think you see that behavior among any type of mammal.

The touching the leg and repeatedly calling her ‘Hillary’ was just gravy.

“But it was wonderful. One of the best interviews I’ve ever witnessed,” Reines added. “Wish it were on live tv.”