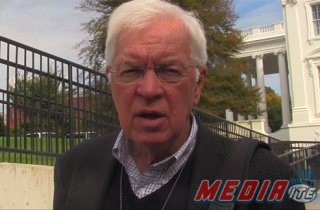 In a brief interview following Wednesday’s White House daily briefing, liberal radio giant Bill Press lashed out at the Obama administration’s handling of the rollout of the Obamacare website, Healthcare.gov. He called it “inexcusable… that there were all these problems with the website,” and “that the Obama administration “has put up such bullshit excuses for the way it happened.”

“I don’t buy any of these excuses,” he continued. “The idea that the traffic caused the problem is ridiculous, I mean, they tell you for five years that millions of Americans are interested in getting health insurance, and then they say ‘Oh, we’re surprised so many people want health insurance. And now they’ve brought in the best and brightest to fix it. Well why didn’t hire the best and brightest, instead of this dumb Canadian firm, to put it together?”

Asked how long he thinks it will take to get the website under control, Press said “I think it will probably take the whole six months, and I think they’re going to end up having to delay fining people for not having health insurance, because of the problems with the website.”

Press also had some choice words for Press Secretary Jay Carney over his conduct of the briefings, specifically the amount of time he spends on the front row.