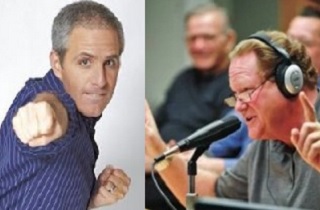 The controversy over an NBC Universal property’s attempts to unionize has erupted into yet another massive feud between MSNBC host and longtime radio personality Ed Schultz and PandoDaily writer/local radio host David Sirota. In the latest installment of this long-running feud, Sirota calls on Schultz to take a stand in the labor dispute between Peacock Productions and NBC Universal, and throws in a pile of choice sticks and stones for good measure.

Schultz’s fellow MSNBC host Chris Hayes has reportedly met with Peacock Productions workers attempting to unionize, while Schultz reportedly ignored requests for a meeting. During an extended call on his radio show with labor reporter Mike Elk, Schultz expressed support for collective bargaining, but would not weigh in on this specific dispute. Since Schultz is closely associated with the labor movement, this did not sit well with Sirota. From PandoDaily:

(M)any information economy workers who might want to form a union in their workplace are effectively intimidated into backing off their aspirations. This is particularly true when those workers see alleged icons of worker solidarity fearfully echoing management’s ugly anti-union agitprop the moment union solidarity becomes a personal question for them.

Which brings us to Ed Schultz.

An old Limbaugh clone is asked: Which side are you on?

For years, Schultz was a barely noticed cookie-cutter conservative radio host in the mold of Rush Limbaugh. As Salon’s Justin Elliott reported a while back, Schultz bashed immigrants, opposed abortion and made fun of homeless people. From those years firmly anchored on the right-wing side of the class war, he has a deep familiarity with anti-union agitprop.

Ouch. After an uncharitable retelling of Schultz’s conversion from conservatism, which he credits to his wife Wendy, Sirota makes his way back to the present day:

(T)his is a moment asking these icons labor’s age old question: Which side are you on?

This should be a very simple question for Schultz. Sure, it is certainly possible that the higher worker-bee wages gleaned from a successful organizing drive might be used by Schultz’s bosses to plead poverty and deny Schultz a raise when the host’s own $4 million-a-year contract is up for renewal. But, then, Schultz is the self-billed champion of unions who uses workers as his program’s visual props, and who built his multimillion-dollar brand almost exclusively on his public alignment with labor. Hence, standing with workers in his own workplace should be a no brainer for him, right?

It doesn’t seem that way.

Sirota has given tremendous credit to Chris Hayes for meeting with the Peacock Productions workers, as he should, and Schultz could have also met with them in secret, but it’s not as if Hayes is speaking out about this either. Whatever fear is working on Ed Schultz clearly affects Hayes, or it should. Meeting with the workers in secret was a courageous move that carried some risk, but speaking out publicly on such a matter is another kettle of fish entirely. It is a little bit naive for Sirota to expect Ed Schultz to risk being fired by speaking out against his employer, or for Hayes to do so. Whatever you think of their motivations, they can’t promote union rights nearly as well if they lose their respective platforms.

On the other hand, some things are worth the risk. If Hayes and Schultz spoke up in favor of unionizing, maybe they’d get fired, or maybe it would help the workers, and maybe MSNBC’s labor-friendly viewers would rally behind the hosts. Although he’s not talking about it, maybe Chris Hayes heard something at that meeting that convinced him this isn’t the hill to die on. Maybe when legs start getting broken, that’ll change.

Sirota spills a lot of virtual ink slagging Ed Schultz, which makes it unclear whether he’s chiefly concerned with gaining Schultz’s support for this effort, or just beating up on Schultz to get his jollies. It doesn’t really seem to help anything but popcorn sales. MSNBC trades on liberal issues like organized labor, and it should not be a firing offense for their hosts to speak out on this. Making Ed Schultz the bad guy may feel good, but it’s not going to do those Peacock Productions workers any good.

Update: Sirota correctly points out that firing someone for assisting a union is illegal, a point that he made very well in his post, along with the observation that such retribution is routine. Running afoul of management opens you up to firing or retribution under other pretexts. In cable television, they’re not hard to find. Here’s the relevant pagraph from Sirota’s commentary:

Under federal law, it is illegal to take a worker “to the woodshed” (read: harass, intimidate or terminate) for meeting with union organizers. Yet, such punishments are now so pervasive and violations of labor law are now so accepted as AOK within the information economy that prominent industry publications like Inside Cable News don’t even bother to contextualize such punishments as potentially illegal. Just as bad, they actually slam people like Hayes for supposedly committing acts of “betrayal” for daring to exercise what are ostensibly their statutorily protected rights. Yes, even among the trade press that is supposed to objectively cover the information economy, even a better-protected worker like a TV host even thinking about forming a union is depicted as “crossing a line he shouldn’t have crossed.”