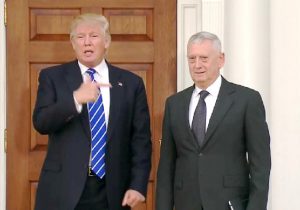 Reporters and liberals (but I repeat myself) complained Wednesday about the number of retired military Donald Trump was selecting for his cabinet, with many wondering it didn’t represent a “military junta.”

Three generals and maybe a fourth. Can we just cut to the chase and call ourselves a junta?

How many generals do you need in government before you technically become a junta? https://t.co/cGUJse64M3

This is a great question, but it’s not likely that @realDonaldTrump knows what the word junta means…. https://t.co/nlfWJRKDj9

Two more and I think we call it a junta.https://t.co/cCLqvIEIML

Now a third retired General in the Cabinet! I think that’s pretty much just one away from being considered a junta. #TrumpTransition

Yet another retired general joins Trump admin as it starts to look more like a military junta than a civilian govthttps://t.co/aGkdmyLqRP

The term “junta” is typically reserved for dictatorial governments led by active military, not governments under civilian control with former military in high-ranking roles. The term also typically carries the connotation that the ruling class came into power “after a revolutionary seizure of power.”