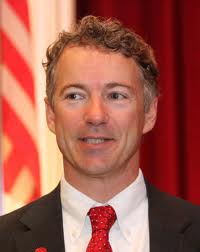 In the wake of GQ’s profile of Kentucky Republican Senate candidate Rand Paul as a bong-loving, “Aqua Buddha”-worshiping, secret society frat boy during his undergrad years, Rand Paul’s column in USA Today likely won’t draw much attention, which is a shame.

In his column yesterday, Rand Paul set out to distance himself from the Libertarian label. Ironically, though, he winds up spending the majority of his time explaining and defending the libertarian philosophy rather than making a case for his philosophical alternative.

The “libertarian” label has fallen out of Paul’s favor because, as he explains it, the word has become an “emotionally charged, and often misunderstood, word in our current political climate.” Instead, he prefers the term “constitutional conservative.”

I choose to use a different phrase to describe my beliefs — I consider myself a constitutional conservative, which I take to mean a conservative who actually believes in smaller government and more individual freedom.

This isn’t the first time Paul has pushed the patriotic-sounding alternative label. Yet the distinction between libertarianism and constitutional conservatism remains murky, and Paul’s column does little to clear the waters. He harkens back to the Founding Fathers and incorporates a heavy dose of “Tentherism” in a anti-big government spiel that sounds distinctly libertarian.  And, of course, no column from the right side of the political spectrum is complete without a Ronald Reagan quote:

Liberty is our heritage; it’s the thing constitutional conservatives like myself wish to preserve, which is why Ronald Reagan declared in 1975, “I believe the very heart and soul of conservatism is libertarianism.

So he’s not a libertarian but libertarianism is at the heart of his political philosophy? Actually, given that mind bender, it’s perhaps not hard to see why Paul’s quasi-refutation of the libertarian label doesn’t hold a torch to his college escapades.