Rush Limbaugh Explains ‘Ashamed Of My Country’ Comments: ‘The Left Has Beaten Us’ 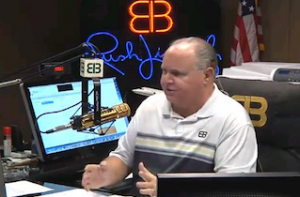 Rush Limbaugh knew that his radio show ratings would be up after his controversial comments from Thursday about being “ashamed of my country” for the first time. He welcomed his new listeners by saying, “I realize that many of you tuned in today wanting to hear more of this… You wanted to hear more about it, and I haven’t really discussed it yet and you’re probably angry, and I want to tell you why.”

He went on to explain that he “didn’t say this yesterday to generate attention, interest, or whatever. I don’t do that. That’s not the reason I say anything, any day.” But he did admit to waiting until the later part of his show to address the comments because of “the old broadcast trick of hooking you in and keeping you waiting.”

Limbaugh then spent two minutes replaying the essence of what he said on Thursday’s show, which has ironically drawn similar criticism to what First Lady Michelle Obama said in 2008 about being “proud of her country for the first time.” Once the excerpt was over, he began to clarify what he had meant, in order to fend off accusations that he’s “ashamed” of himself. On the contrary, Limbaugh continued to insist that he’s “ashamed” of the liberal direction in which the country has gone, despite his best efforts to “inform” the people.

“Anyway, my point with all this is that for 25 years, folks, we’ve been dealing with the same premise: “Unless we spend another dime, the country is going to cease to exist,” and for 25 years I have responded to each premise on what I call an intellectual, point-by-point basis refuting every claim. The purpose of this program has been to create as large a body of informed voting citizens as possible. While we’ve been largely and profoundly successful at that, the left has beaten us.

They have created far more low-information, unaware, uneducated people than we’ve been able to keep up with. We’ve had a profound impact in improving, increasing that universe of people — citizens — who are in the arena of ideas now, who are informed and educated. I’ve always had a Civics 101 view of the country: People get what they want, they vote what they want, and they get the way they vote.

And if a majority of people are educated and informed and know what’s going on, liberalism — and these powerful forces that have ill intent to the country — can be defeated. Yet despite overwhelming success in creating more and more people who are informed and active and involved, the left has control of the education system — control of the pop culture, movies, TVs, books, music. We’ve just been outnumbered.”

Limbaugh spent several more minutes making his point, but the gist of his “shame” is summed up by the three paragraphs above. By the end of the segment, there was a real sense of resignation in Limbaugh’s voice, a feeling that his brand of conservatism may have hit a wall. “I’m fed up with it,” he said. “I can’t do it anymore.” He concluded by reiterating the sentiment that has drawn support from Sean Hannity and Herman Cain among other Republicans, saying, “The whole thing is shamefully absurd. I don’t know how else to say it.”