Limbaugh Heaps Praise On Rand Paul In Interview: You Are ‘A Hero To A Lot Of People Today’

Limbaugh Heaps Praise On Rand In Interview: You Are 'A Hero To A Lot Of People Today'
Twitter share button 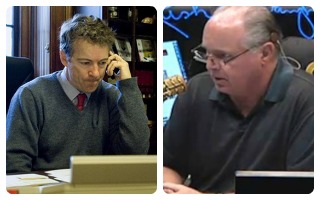 Conservative radio host Rush Limbaugh invited Sen. Rand Paul (R-KY) on his program on Thursday for a thorough debriefing following the senator’s marathon filibuster on Wednesday. In a wide-ranging interview, Paul told Limbaugh that he was thought it was important to have a debate about President Barack Obama‘s approach to American citizens who are viewed by the administration as being subject to a drone strike. Limbaugh heaped praise on Paul for his ability to “take this president on” and said that many see him as “a hero” today.

“I was thinking of you when I was in the middle of this 13-hour – I got about five hours into it, and I was like, ‘well, Rush does four hours of this every day. Certainly, I can do four more hours,” Paul said.

“I doubt I was in your thoughts last night,” Limbaugh laughed.

Paul explained that he had been concerned about the issue of drones for some time, but only decided to filibuster in order to compel the White House to surrender more information on the drone program yesterday morning.

“Nobody in the Republican Party has dared take this president on,” Limbaugh exclaimed. “You did last night, and you’re alive today to talk about it.”

“You are, in certain ways, a hero to a lot of people today,” he added. “This was, to me, a seminal event last night that could change the direction that we are all heading – particularly in terms of educating and informing the American people about what actually is happening in their country.”

“We ask a pretty important question, and that’s whether you get to pick and choose which parts of the Bill of Rights apply to American citizens,” Paul replied. “We don’t think that the president, or any politician –Republican or Democrat — should get to choose when the Fifth Amendment applies.”

Paul added that the president’s “intention” to not execute citizens on American soil without due process was insufficient for Paul to dissuade him from engaging in a filibuster.

Paul clarified that he was not against the use of drones on the battlefield, but that he was concerned about the collateral damage that these unilaterally authorized strikes have incurred. He added that, for American citizens inside the country, they must have their “day in court” if they are not an active combatant.