Limbaugh: Hillary Deliberately Waited Until My Show Was Over to Hold Presser
audio

Limbaugh: Hillary Deliberately Waited Until My Show Was Over to Hold Presser 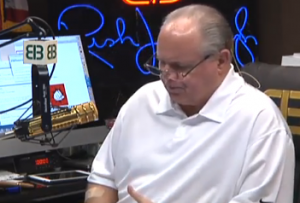 Rush Limbaugh has a remarkable theory that Hillary Clinton deliberately waited until he wrapped his radio show yesterday before holding her press conference. Limbaugh’s radio show goes from noon to 3:00 pm EST, and Clinton’s presser on her use of personal emails started around 3.

Limbaugh said today he predicted yesterday “There’s no way that she’s gonna come out and do this press conference before this program ends. It isn’t gonna happen.” And this led him to believe that Clinton is “stuck in the 1990s.”

He recalled Clinton’s infamous “pink press conference” in 1994, in response to a report about profits Clinton made on trading commodities that were not previously disclosed. Limbaugh boasted that he “was the reason [for it] because I had changed the direction of the way all this was being looked at.”

He claimed that during the 90s, the Clintons always “waited until this program was over to do anything of substance so that I would not have immediate opportunity to comment, because I was the only anti-voice back then”: