Limbaugh Rips Media ‘Groupies’ Fawning Over Obama: ‘Happiest They Have Been In Recorded History’
audio

Limbaugh Rips Media ‘Groupies’ Fawning Over Obama: ‘Happiest They Have Been In Recorded History’ 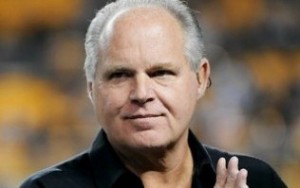 Rush Limbaugh was all caught up on the weekend’s inaugural festivities on Tuesday — and the media’s “fawning” coverage of the event left a bad taste in his mouth. Taking aim at the media, Limbaugh said there’s no longer even a pretense of objectivity.

Even some conservatives, he said, were saying President Obama‘s not really such a bad guy — not a socialist or Marxist, but just “a Chicago thug.” Limbaugh wasn’t pleased: “It became clear, folks, that you and I, who are conservatives, we’re becoming more and more marginalized and isolated on a little island here, and it’s very small.”

People “are jumping off our own ship” left and right.

But he digressed, moving on to the media’s “fawning over Obama” during the inauguration, which, Limbaugh asserted, demonstrated that there’s “no pretense that these people are journalists anymore.” CNN, he cited specifically, taking a jab at, among others, Al Roker, who “practically messed in his pants again.”

“It is unlike anything I have ever seen,” Limbaugh said. One step farther is CBS political director/Slate correspondent John Dickerson, who recently penned a Slate piece arguing Obama should “declare war” on the GOP. I warned you, Limbaugh said, that the top priority on the agenda would be destroying the Republican Party.

Running through some clips, he was taken aback by how excited media “groupies” were to be in the president’s presence. “I think this is the happiest they have been in recorded history,” he asserted. “Certainly in the modern era. Certainly they are happier than the first time around in 2008.”

“I don’t feel that way about anybody,” he added. “There’s not a human being I could get close to that I would go ga-ga for. Other than me.”

About Obama, Limbaugh concluded, “We are dealing here with a cult figure.”