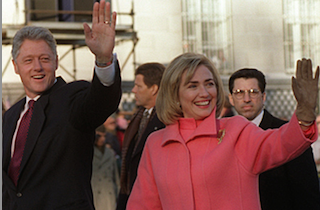 Clinton: The Musical will make its Off-Broadway debut later this month as part of the New York Musical Theatre Festival. And now, thanks to Mother Jones, we have a first listen of one of the songs from the show, simply titled, “No.”

The cast of the show, which features two actors playing the naughty and nice sides of our 42nd president, performed a sneak preview for the press on Wednesday. In the song below, the Monica Lewinsky scandal has just broken and Hillary is helping Bill make some necessary adjustments to an upcoming speech in order to avoid any unintentional double entendres.

Australian composer Paul Hodge, who wrote the music and lyrics for Clinton, said it was his brother Michael Hodge, with whom he collaborated on the show’s book, who came up with the idea of the two Clintons.

“Michael came up with idea that Clinton should be be two actors and two characters,” Paul Hodge told Mother Jones. “At first I said, ‘That’s the stupidest idea I’ve ever heard. But then I read Clinton’s autobiography, where he writes about sort of living two parallel lives. And then there was [Clinton adviser] Dick Morris who had [nick]names for him like, ‘Saturday Night Bill’ and ‘Sunday Morning President Clinton.’ So then I thought that it was actually a really good device to explore a person who is so complex.”

“Being Australian, I’m neither Republican or Democrat, so I don’t come at this from any political standpoint or agenda,” he added. “I come at this looking at [the Clintons] as human beings.”

Listen to audio below, via Mother Jones: