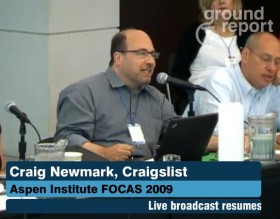 Collectively, the participants at this year’s forum represent thousands of newspapers, radio stations and television channels–meaning the corridor conversations at the conference could translate to sweeping strategic changes in American media.

It’s an ambitious agenda – you can follow it on Twitter at the #FOCAS09 hashtag, or watch below, or see an actual excerpt of said ambitious agenda below that. It’s on autopilot right now, but during the writing of this post we were favored with cameos from Craig Newmark, the IHT’s Michael Oreskes and someone whose name escaped me but who doesn’t seem to hold with this Twitter thing — he kept on talking about “the care and feeding of the superstars,” which I imagine would probably not sit well with some bloggers. His superstar of choice was Jim Fallows, whom he mentioned frequently. Catch up below:

We’ve got an excerpt of the agenda on the next page. They’re keeping these people busy in exchange for their fancy Aspen digs!