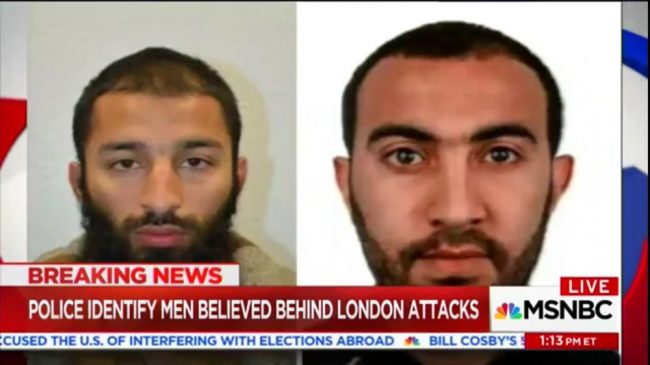 London’s Metropolitan Police identified two of the three terrorists who carried out the attack on Saturday evening that killed seven and injured dozens.

The law enforcement agency issued a press release on Monday that revealed that they “believe two of the men are Khuram Shazad Butt and Rachid Redouane, both from Barking, east London.”

The police statement noted that “Butt, 27….was a British citizen who was born in Pakistan. Rachid Redouane, 30…had claimed to be Moroccan and Libyan. He also used the name Rachid Elkhdar, with a different date of birth of 31.7.91.”

London’s police force also gave a summary of the attack in their press release.

At 22.08hrs on Saturday, 3 June, a hired white Renault van travelled north to south on London Bridge and mounted the pavement, which collided with pedestrians before they abandoned the vehicle. The three attackers, armed with knives, continued into the Borough Market area, stabbing numerous people. The attackers were then confronted by the firearms officers and eight police firearms officers discharged their weapons.

Later, the statement also disclosed that “Khuram Shazad Butt was known to the police and MI5 [the domestic counter-intelligence agency of the UK]. However, there was no intelligence to suggest that this attack was being planned and the investigation had been prioritised accordingly. The other named man, Rachid Redouane, was not known.”

The third perpetrator has yet to be identified by the Metropolitan Police. However, earlier in the day, The Independent reported that “one of the London Bridge terrorists was carrying an identity card issued in Ireland when he was shot dead, security sources in Dublin said.”