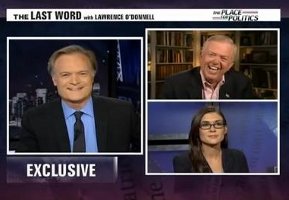 Lawrence O’Donnell continued his booking hot streak tonight when he had both Lou Dobbs – at the center of this controversy about employing illegal immigrants on his property – and Isabel MacDonald (whose report in The Nation sparked the controversy) onto MSNBC to debate the issue of whether Dobbs once employed illegal immigrants, despite his long-standing hard-line stance against illegal immigration.

O’Donnell strictly mediated – this was Dobbs vs. McDonald. And the first thing to jump out about this segment: it was long, taking up half the program. McDonald thought Dobbs was “holding [him]self to a completely different standard than the standards that [he’s] held all other American employers to,” while Dobbs thought her piece was “a hit job.” At the center of the debate was, seemingly, semantics: Dobbs seemed to be out to prove that he never “directly, knowingly employed any undocumented worker” (and MacDonald admitted she didn’t have evidence as such), while The Nation’s point wasn’t so much that Dobbs even indirectly employing undocumented workers would make him a hypocrite. (It’s even right in the title.)

In fact, as O’Donnell himself said to Dobbs at one point:

This gets at the heart of it: Dobbs at one point said, “If you want to hold me to…a different and higher standard, you go right ahead.” And that “different and higher standard” is the price of making illegal immigration a pet cause for so long. Dobbs also mentioned during the interview his ultimate goal is a “rational, effective, humane immigration policy.” That’s a tall order, and after The Nation’s piece – “hit job” or not – the pressure is on for him to contribute significant ideas toward just that.

UPDATE: Here is the full video, split into two parts.