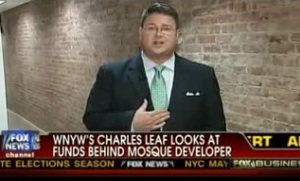 A North New Jersey regional website is reporting that a reporter for WNYW Fox5, the New York CIty’s Fox News affiliate, is being held on $250,000 bail after being arrested for aggravated sexual assault on a minor. The reporter has been identified as Charles Leaf, who received some national attention for an attempted ambush interview with Sharif el-Gamal, the developer behind the so-called “Ground Zero Mosque,” back in late August of this year.

The 41-year-old newsman was being held on charges that include sexual assault and endangering the welfare of children, according to the Bergen County Sheriff’s website.

The award-winning reporter was being held in Bergen County Jail on $250,000 bail. Details of his arrest were not immediately known.

While Leaf is primarily a reporter Fox’s New Yorkaffiliate, according to his online bio at MyFoxNY.com he has appeared on a litany of programs on Fox News, including The O’Reilly Factor, The Fox Report, Fox & Friends, On the Record with Greta Van Susteren, America Live with Megyn Kelly and Geraldo at Large. Details surrounding Leaf’s arrest have not yet been released by the Bergen County Sheriff’s office.

Leaf received a great deal of attention back in August for the following ambush interview and attempted expose of the developer of the Islamic Cultural Center planned for Lower Manhattan, a video of which you can watch below.