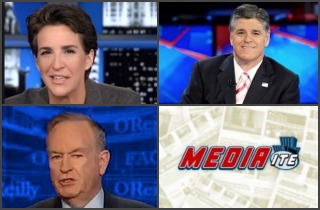 If you read the vibrant comment section of this site it is striking how much debate centers on whether this is a “conservative” or “liberal” site. ​​It’s ​a full blown Mediaite identity crisis​!​ Cable news hosts have been weighing in as well ​but mostly ​in an attempt to subtly diminish Mediaite with political name-calling disguised as statements of fact. So this response is probably overdue.

The latest example came last Friday night when Rachel Maddow once again pronounced on her eponymous MSNBC program that Mediaite is a “conservative website.” After re-playing a sound-bite of her own commentary on her own program about the questions over Bill O’Reilly‘s past reporting,​ she prefaced a response Fox News provided to Mediaite with that​ gratuitous dig. A bizarre reference considering the Mediaite piece to which Fox responded, highlighted even showcased, Maddow’s commentary on the issue.
​ ​
It’s not the first time she has called out this site as a “conservative” one either​. Her MSNBC colleague Joy Reid has gone further repeatedly using political taunts like “Fox News fan site” or even “wingerish.” These critiques might be of some concern if it weren’t for the fact that those on the other side of the cable news aisle have come down even harder on what they view as the Mediaite political agenda.

To Bill O’Reilly and Sean Hannity this “Fox News fan site” actually ​targets them with politicized venom. The week before Maddow’s most recent comment, O’Reilly once again characterized the site as liberal in the context of a segment on how much “courage” it took for one of our opinion writers to assert that ​​the O’Reilly reporting coverage seemed politically motivated. Writer Joe Concha must have been under enormous pressure, O’Reilly claimed, “because Mediaite is fairly left-wing.” And that was one of his softer summaries. Both O’Reilly and Hannity ​say they are convinced​ that Mediaite “doesn’t like me” and have regularly called it everything from “far left,” to “Media Matters lite.”

I understand​​ ​that ​this site can ruffle the feathers of those accustomed to being commentator rather than the subject of commentary. Now that Mediaite is welcoming record traffic and ​has become part of the regular reading diet in national newsrooms and many political offices, certain​ subjects, ​more than ever,​ feel a need to attempt to undermine any coverage that doesn’t just evangelize for them or their political views. But when you look at the sum of the jabs, it actually reflects a larger problem with politics in America today — moderation as the enemy of both extremes. Putting aside the fact that these characterizations make the site seem even more interesting, it’s obviously just a classic, at times puerile, effort to ​shoot ​the messenger.​ Y​ou are​ ​with us or against us,​ ​with no room for a ​middle ground or story by story evaluation.​

Let me be clear, Maddow, O’Reilly and Hannity are three of the most talented​, ​smartest​​ ​and​ ​entertaining​ ​hosts on cable news.​​ They’ve earned passionate followings by wisely and strategically covering politicized stories. Furthermore, I think it fair to say that the Mediaite writers on both sides of the political aisle at the least, admire their success. B​ut would a Megyn Kelly or Mika Brzezinski, for example, make these kinds of generalizations? (​I think not although I may soon be proven wrong!) Even Greta Van Susteren, who has expressed frustration with certain stories on the site, has been specific in her critiques rather than reverting to broad name-calling. Is that because they have more nuanced political views? Or are some just more thin-skinned than others?

Yet another well-respected​ ​(​and frustrated​)​ cable news host recently threatened to expose the “hidden agendas” of the Mediaite writers which I, of course, ​welcomed him to do. After all, this sniping is only good for the site and if any of the writers have agendas, which some do, they make them quite clear in their opinion pieces. In the end, he was just upset about a (totally fair) story the site had written about him.​

I have always attempted to encourage a mix of political views on the site and yet there is no question that with each different group​ of writers that equation shifts a bit. It’s impossible to be right down the middle particularly on a site that encourages​​ ​opinion. The editors determine the content that we publish​ day to day but in hiring them, I inevitably influence the coverage. There have been times when I ​thought the site ​wa​s slightly too conservative and other times when I feared it had become a bit ​too liberal. I know both extremes will deride this comment but we do our best to keep it even-handed. But regardless of whether one views Mediaite as left or right of center, its silly (or blinded) to just claim we are a “liberal” or “conservative” site. Sadly, the stories that truly resonate for the partisans are the ones they don’t like and Mediaite is at its best when it’s highlighting absurd commentary from the fringes.

I do believe the site has certain biases but they relate more to who it covers rather than ​how they cover it. I mean, come on Eric Bolling, this site has helped make you a ​name. And it seems if my old office mate Don Lemon says that he took a subway home, it m​ight get covered.

So thank you all for the controversy, but I think those identifying the site firmly in one political camp or another know that their sly barbs are intentionally over-simplified and misleading. If they​ don’t, well then I would humbly suggest that therein lies the problem.