Maher: Americans are Tired of Being PC and Sanders and Trump are Proof 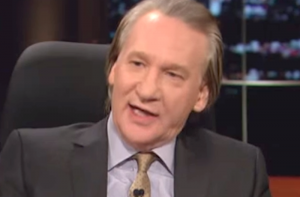 In a new op-ed for The Hollywood Reporter, Bill Maher explained why Bernie Sanders just might win and how what he sees as a way-too-PC culture is the entire reason Sanders and Donald Trump are primed to ascend to their respective parties’ nominations.

Listen. Maher hates political correctness. He hates it. He really, really hates it. His idea that Trump’s meteoric rise in the polls is all thanks to PC culture is one that he’s shared before. Nothing about his piece was totally revolutionary compared to opinions he’s expressed in the past, but the story, titled “Anguish of an L.A. Liberal,” is still worth a read.

He took the time to painstakingly explain how a disgust with well-rehearsed politicians has manifested itself in an interest in “authenticity above all,” which Trump and Sanders both have, albeit in very different ways.

Sanders “has earned the right to be considered absolutely viable,” he wrote before calling voters in places like Indiana “a sleeper cell” who will be left to prove if they can “assassinate the old way of doing things.”

He went on to say, “Poor, poor Hillary Clinton,” calling her a “Charlie Brown figure” who may very well lose the nomination again this year. He mentioned liking her and not finding her dishonest at all, noting that “the hatred for her is just amazing.”

When the time came to really get in there and talk about political correctness, he started with “Sanders, Trump, they have changed politics. It’s no longer this endeavor where you have to watch every word you say,” but then, some of Maher’s examples fell flat:

Still, he addressed his view that in spite of all of the rampant political correctness, President Barack Obama — who, admittedly, isn’t always on board when it comes to the demands of the far left — has been a “more like a free bird than a lame duck” with plenty of examples to back himself up. It’s clear that he supports the liberal candidate in any situation, PC leanings notwithstanding. For as much as he hates political correctness and works to identify the ways in which widespread hate for it affect political outcomes, he still has faith in his party and the piece is a bit of a tough-love letter to it.

He ultimately ended up defending Clinton in a very roundabout way, cautioning those hungry for the Sanders-driven revolution not to lose focus if she becomes the nominee. He wrote, if a little uninspiringly, “I’ve told my audience, who are overwhelmingly for Bernie: If you’re on a plane and they don’t have your first choice — the fish — eat the chicken!”