Maher: Cruz ‘Scarier’ Than Trump, Smart But ‘In The Service of Evil’

Maher: Cruz ‘Scarier’ Than Trump, Smart But ‘In The Service of Evil’ 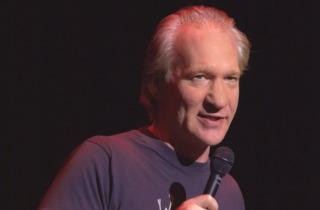 In a new interview, Bill Maher has some faint “credit where credit is due” words for Donald Trump while warning that Ted Cruz is far “scarier.”

There’s some conventional wisdom that at least Cruz is a principled conservative compared to the all-over-the-place rantings of Trump, but as Maher told The Daily Beast, “Donald Trump, even though he’s not a career politician, seems to instinctively understand what so many career politicians have trained for years to learn, which is how to defeat an opponent, how to go after his weakness.”

He thinks there’s a strong possibility that Trump could win the presidency, partly due to how big a percentage of the Republican electorate agrees with some of his more outlandish ideas. But that being said, Maher admits that Trump “says some things that a liberal can love.”

He likes what Trump says about fighting hedge fund managers and staying out of the Middle East, and his “we kill people too” response to questions about Vladimir Putin is “the kind of thing Noam Chomsky says.” In essence, Maher thinks that while Trump would be a “disaster” president, he could be persuaded.

Ted Cruz, on the other hand…

Ted Cruz is scarier than Donald Trump… It’s high intelligence in the service of evil. It’s one thing to have evil people who aren’t that bright! There’s a reason why everyone hates Ted Cruz. There’s a reason why the big question about Ted Cruz is always, “When he shaves in the morning, how does he avoid spitting in the mirror?” To think of this guy being the president of the United States, this ambition and love of power combined with being on the wrong side of every issue, it’s a very scary prospect.

Last year Maher got really peeved at Cruz for taking a blatant “opportunity to lie” about how rock musicians reacted to 9/11.