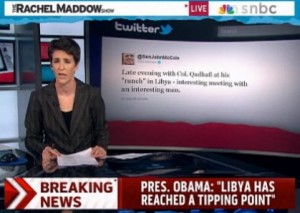 Sen. John McCain‘s statement on the collapse of Muammar Gaddafi‘s reign in Libya has prompted the resurrection of a two year-old tweet in which McCain says, while visiting the dictator with an eye toward improving relations with Libya, “Late evening with Col. Qadhafi at his “ranch” in Libya – interesting meeting with an interesting man.”

Since McCain’s shifting rhetoric toward Gaddafi tracks with US foreign policy, does he really have anything to be embarrassed about?

The simplistic view of McCain’s tweet, that he was “for Gaddafi before he was against him,” is as unfair to McCain as some of the right’s attacks on President Obama have been, such as former Bush press secretary Dana Perino’s false claim that the White House “supported the release of” convicted Pan-Am Flight 103 bomberAbdel Basset Ali al-Megrahi.

On Monday night’s The Rachel Maddow Show, host Rachel Maddow highlighted the tweet, and noted, broadly, that it illustrates the need for a more nuanced, less reactionary approach to dealing with these issues. “The war in Libya does not knit neatly into American politics,” she said. “Senators Graham and McCain want to look like the toughest anti-Gaddafi guys around, in contrast with this wimpy President, but there’s that darn footage of them, effectively cuddling up with Gaddafi two summers ago.”

She notes that this mission “doesn’t knit neatly into American politics,” and she’s right. President Obama took almost as much flak from his own side as he did from Republicans, and those who wish to criticize McCain for “cuddling up” to Gaddafi in 2009 are probably some of the same people who wish that President George W. Bush had handled Iraq more like he did Libya. Perhaps this is payback for the relentless attacks from the right on President Obama’s diplomacy, but that doesn’t make it fair.

It is fair, though, to expect McCain to recognize the United States’ role in the apparent success of the Libya mission, and President Obama’s handling of it. Instead of a decade-long quagmire that left America holding the bag, and the tab, the President engineered a US role that led to success with Rumsfeldian swiftness, without US casualties, and all for less than the cost of a single week in Iraq or Afghanistan.

Here’s the clip, From The Rachel Maddow Show: