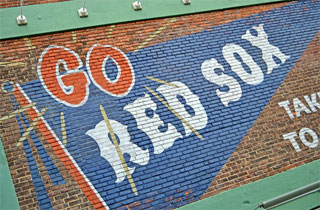 A New Jersey man recently won big money from the city of New Brunswick after a federal judge ruled that they could not prevent the club owner from opening a sports bar called “Buck Foston’s Road House.”

(If you don’t get it, the club owner, Lawrence Blatterfein, is a New York Yankees fan. The dots connecting for you yet? No? It means “Fuck Boston.”)

Back in 2011, Blatterfein applied for a liquor license for his new anti-Red Sox bar, only to be turned down because, he believed, the City’s mayor was an “avowed Boston Red Sox fan.” He alleged that Mayor James Cahill persuaded the city council to turn down his application because he believed that “Buck Foston was a “vulgar” name that “didn’t belong in New Brunswick.”

While the mayor disagreed, claiming they rejected his license because Buck Foston would be “located on a dangerous off-ramp connecting two major highways in New Brunswick,” a federal jury disagreed, awarding Blatterfein $1.5 million in damages — way less than the $7 to 10 million he initially sought, according to the Star-Ledger, but enough to make it feel like a victory for Blatterfein.

He moved to Florida without opening Buck Foston in 2011, but says he plans on opening it elsewhere, which means I now have a reason to take a road trip to Florida with a pallet of toilet paper and nine dozen eggs.

(PERSONAL NOTE: As a native Bostonian and Red Sox fan, my first instinct was to retaliate by opening a bar called ‘Yuck Fankees,’ until I realized it sounded like something a toothless child would say.)