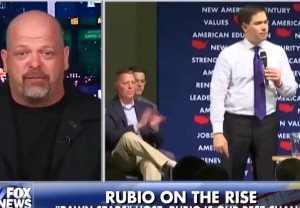 To history and junk-obsessed Americans, he’s the star of History Channel’s Pawn Stars, but to Marco Rubio, Rick Harrison is a coveted celebrity endorsement who even appeared in a Rubio ad. On Monday morning, Fox and Friends touted Harrison’s appearance by saying that Rubio had “just picked up a star-studded endorsement” (although Harrison endorsed him back in July), and asked him to explain why he thinks Marco is “the real deal.”

Harrison explained that he was most attracted to Rubio’s promise to open more trade schools, and then he veered out of his lane a little when Brian Kilmeade asked him about immigration:

You know, I mean, I also tell the press this all the time, I’m not a mouthpiece for him. Me personally, I believe that, you know, eventually we can’t deport 12 million people. We just can’t do it. We’ve got to figure out some system. Maybe have a large fine ten years from now, if they pay their fine they can get a path to citizenship, something like that. I don’t have a problem with that. We can’t deport that many people.

Rubio has, of course, been backing away from this inherently decent position on immigration like it was a fugazi Rolex at a swap meet, but Rick Harrison, as anyone who watches his show knows, is an inherently decent guy. He has a deep appreciation for history, with a moderate outlook that comes through loud and clear, and he has an honest streak that causes him to tell people when they’re not asking him for enough money.

He also told Fox and Friends that his endorsement of Rubio has cost him business, but until you’ve waved the red cape of a path to citizenship, you really ain’t seen nothing yet. At least he had the presence of mind to disclaim Rubio from such heresy.