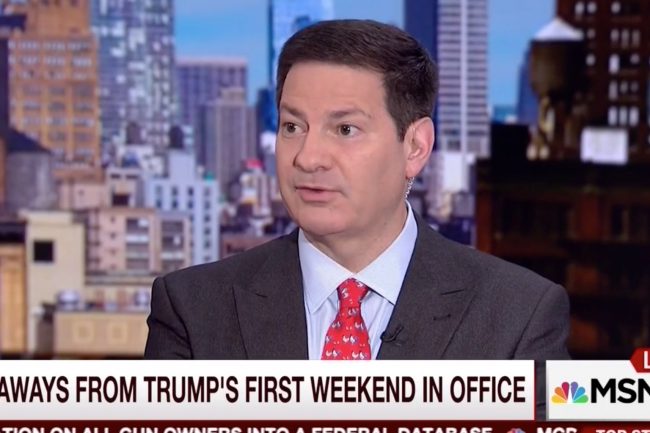 More women have come forward with sexual harassment allegations against journalist Mark Halperin, and Halperin has issued a lengthy statement tonight in response.

After CNN’s initial report earlier this week, more women came forward, and with the four in CNN’s new report tonight, that’s at least a dozen women alleging harassment from Halperin.

One woman alleges that he masturbated in front of her in his office:

“I pretended like I didn’t know what was going on and we talked a bit more and then he abruptly wrapped up the conversation,” she continued.

Another woman says that Halperin threw her at a restaurant window “and he lunged at me with his body pressed against mine against the window and came at me with his open mouth.”

Halperin released a lengthy statement to CNN in response. He says, “I am profoundly sorry for the pain and anguish I have caused by my past actions. I apologize sincerely to the women I mistreated.”

He claims that he realized he had a problem “towards the end of my time at ABC News,” but claims rather definitively, “Those who have worked with me in the past decade know that my conduct in subsequent jobs at TIME, Bloomberg, NBC News, and Showtime has not been what it was at ABC. I did not engage in improper behavior with colleagues or subordinates.”

You can read his full statement here:

I am profoundly sorry for the pain and anguish I have caused by my past actions. I apologize sincerely to the women I mistreated.
The world is now publicly acknowledging what so many women have long known: Men harm women in the workplace. That new awareness is, of course, a positive development. For a long time at ABC News, I was part of the problem. I acknowledge that, and I deeply regret it. As I said earlier in the week, my behavior was wrong. It caused fear and anxiety for women who were only seeking to do their jobs.
In recent days I have closely read the accounts of women with whom I worked at ABC News. I have not read these accounts looking for discrepancies or inconsistencies. Instead, in almost every case, I have recognized conduct for which I feel profound guilt and responsibility, some involving junior ABC News personnel and women just starting out in the news business.
Many of the accounts conveyed by journalists working on stories about me or that I have read after publication have not been particularly detailed (and many were anonymous) making it difficult for me to address certain specifics. But make no mistake: I fully acknowledge and apologize for conduct that was often aggressive and crude.
Towards the end of my time at ABC News, I recognized I had a problem. No one had sued me, no one had filed a human resources complaint against me, no colleague had confronted me. But I didn’t need a call from HR to know that I was a selfish, immature person, who was behaving in a manner that had to stop.
For several years around my departure from ABC News, I had weekly counseling sessions to work on understanding the personal issues and attitudes that caused me to behave in such an inappropriate manner.
Those who have worked with me in the past decade know that my conduct in subsequent jobs at TIME, Bloomberg, NBC News, and Showtime has not been what it was at ABC. I did not engage in improper behavior with colleagues or subordinates. If you spoke to my co-workers in those four places (men and women alike), I am confident you would find that I had a very different reputation than I had at ABC News because I conducted myself in a very different manner.
Some of the allegations that have been made against me are not true. But I realize that is a small point in the scheme of things. Again, I bear responsibility for my outrageous conduct at ABC News.
I hope that not only will women going forward be more confident in speaking up, but also that we as an industry and society can create an atmosphere that no longer tolerates this kind of behavior.
I know I can never do enough to make up for the harm I caused. I will be spending time with my family and friends, as I work to make amends and contributions both large and small.