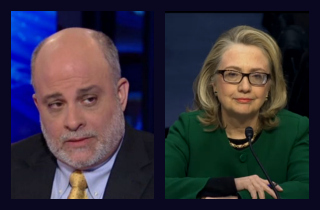 On his syndicated radio show, Mark Levin went off on former Secretary of State Hillary Clinton for her January testimony on Benghazi, particularly in light of recent news that CIA director Leon Panetta and the White House had minimal contact immediately after the siege.

“I’ll tell you what difference it makes, you jerk!” Levin shouted. “That’s right, I said it. You had a cable on August 15th where you were told from Libya, ‘We cannot defend ourselves here.'”

“You knew damn well this wasn’t a protest and you and Obama and the entire administration knew that that poor, dumb filmmaker who’s sitting in some jail as I speak, who’s rotting because of some pretext — oh, he was on the internet, he violated his parole — you held that guy up, you condemned him, you paid for commercials in Pakistan, you used him day after day for five days. And you knew damn well that that man who’s sitting in some jail tonight had nothing to do with any of this.”

“What difference does it make?” Levin again said in a mocking tone. “Every difference in the world!”

He concluded: “You were warned that they couldn’t defend themselves when they were under attack. You did nothing to help these people. Nothing. And the President of the United States is at the point of the spear of this cover-up. He sits there, he knows exactly what happened, and he won’t say a damn thing except that one time when a local reporter called him and he lied through his teeth.”