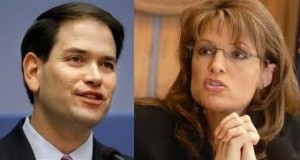 Republican Senator Marco Rubio (R-FL) has become something of an object of derision following remarks he made, in an interview with GQ, which left open the question of whether or not the Earth is more than 6,000 years old. The Daily Caller‘s Matt Lewis is now warning Rubio to expect more of the same, as Democrats try to blunt Rubio’s appeal, with the aid of the media, by making him a joke, just as they did with former Alaska Gov. Sarah Palin. There’s just one problem with this construction: Sarah Palin, at least as potential leader of the free world, is a joke, and if Marco Rubio keeps delivering punchlines like this, he will be, too.

When GQ‘s Michael Hainey asked Sen. Rubio how old he thinks the Earth is, he replied, “I’m not a scientist, man. I can tell you what recorded history says, I can tell you what the Bible says, but I think that’s a dispute amongst theologians and I think it has nothing to do with the gross domestic product or economic growth of the United States.”

Matt Lewis, it should be noted, isn’t a scientist either, man, and yet he seems to know how old the Earth is. That hasn’t stopped him from leaping to Rubio’s defense. He begins by agreeing that “it was a silly question,” one that is “feeding a liberal meme,” and while he allows that conservatives “have willfully allowed this to metastasize,” it is liberals who have have effectively cast Republicans as the anti-science party.”

The problem with this logic is that conservatives allowed their anti-science image to metastasize by being anti-science, by insisting that real rape victims possess sperm-killing magic, or that an un-implanted egg should be able to buy a house, or that the Earth, however old it is, isn’t warming, or if it is, it’s because of dinosaur farts or trees. Yes, liberals exploit these facts, but they are facts. The real problem, though, is that Republicans don’t react by laughing these guys out of the party, they put them on the House Science Committee. Then they blame the liberal media for pointing it out.

Matt does make some good observations, like the annoying fact that even Barack Obama feels the need to baby-talk the Young Earth crowd, but unlike Rubio, the President draws a clear distinction between scientific fact and religious belief, pointing out, as Matt Lewis did, that you can believe in God and believe in science. It’s not a “dispute among theologians,” it’s a fact that religions can either ignore or write into their mythologies.

And so, this is a strategy. Like Sarah Palin in 2008, Democrats view Marco Rubio as a major threat — not just for one or two elections — but someone who could undermine their advantage among the college educated, the young, and Latinos. Like Palin in ’08, he is viewed as an existential threat.

And just like Palin — whom they feared — they want to destroy his credibility; to make him a joke.

He’s absolutely right that Marco Rubio represents a threat similar to Palin, with the potential to appeal to low-information voters, and where Sarah Palin is concerned, the media did make a meal out of her. However, they weren’t exactly roasting an old shoe; there was plenty of meat on them bones. The fever has broken for all but the most delirious Palinistas, and most sensible conservatives recognize that a Palin vice-presidency was a bullet dodged.

Matt’s also right that this is a strategy, but not a Democratic one. Sen. Rubio’s problem isn’t that he really doesn’t know how old the Earth is (which I’m willing to believe he does know), it’s that he, like 2012 presidential loser Mitt Romney and many other Republicans, is afraid that he might alienate some of his party’s more backward voters by demonstrating that he knows (similarly, I’ve always suspected that the newspaper question tripped Palin up because there wasn’t a right answer that would have satisfied her base and normal people).

Instead of warning Marco Rubio about the Democrats and their liberal media minions, Lewis would better serve the Senator by repeating his advice to “modernize,” and let the cavepeople catch up.