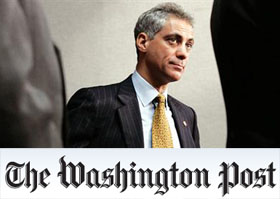 White House Chief of Staff Rahm Emanuel has officially become the Washington Post‘s Apple of Discord, tossed into the op-ed section and starting a civil war. After running a piece by Dana Milbank suggesting that most of the current problems facing the Obama Administration were a product of the president not listening to his Chief of Staff, it published a counterpoint by David Broder suggesting that the piece and rumors that begot it are a product of some social maneuvering on the part of Emanuel– who “likes to win”– and his friends in Congress, and suggesting Obama could have avoided his problems by listening to his adviser is directly undermining his authority. Matt Yglesias chimes in with a column of his own at the American Prospect proposing a novel approach to the debate: what problems, exactly, are the Democrats trying to blame on each other at all?

Both Milbank and Broder present equally impassioned arguments for either side, Milbank claiming that “Emanuel is the only person keeping Obama from becoming Jimmy Carter” while Broder calls the whole thing a “remarkable fiction” perpetrated by “some of Emanuel’s friends [who] are so eager to exonerate him that they are threatening to undermine the president.” The high-profile disagreement in the press even got to Robert Gibbs this morning, where he had to deny there was any animosity between the President and his Chief of Staff.

Whether Emanuel is a righteous, alienated figure or a catty gossip-monger who doesn’t know his place is not the question Yglesias seeks to answer though, because he finds the entire situation symptomatic of a larger issue with the Democrats in general: they have no self-confidence. Why are Democrats trying to blame each other for their problems, he asks, when there aren’t really that many problems to begin with? Why not just highlight the successes?:

“But the broader problem with Emanuel’s viewpoint is that he actually encapsulates the Democratic Party’s main political problem with regard to national security: a perilous lack of self-confidence. It’s true that the right landed some blows with its arguments against Guantánamo’s closure and its hand-wringing over Mohammed’s trial. However, these hits need to be situated within the larger context of an administration that’s done an excellent job of winning the public’s confidence on national security.[…]

Not only do Democrats have a pathetic lack of self-confidence on national security issues, they’re also unable to recognize a strong hand when they have it. Instead of press leaks in which aides compete to brag about how they urged the president to stand tall and fight, we have finger-pointing about who’s to blame for an alleged fiasco even in the absence of any objective problem.”

Yglesias isn’t the first to reveal the self-esteem issues on Team Obama (it is the basic premise of yesterday’s SNL presidential mega-parody), but he is the first to accurately identify them as the force behind the kind of petty backroom politics that leads Dana Milbank to be inundated with insider tips on how much Obama’s failures are not Emanuel’s fault– and the ones that push Broder to defend the president’s positions. Yes, the Democrats’ political capital is close to rock bottom at this point thanks to many unpopular positions they have taken, but a defeatist attitude is a self-fulfilling prophesy. “Blaming” each other for things that are going well makes it seem like even they understand that they are wrong, rather than persuading anyone to agree with their stances.