Maureen Dowd: Obama Should Take A Page From Christine O’Donnell

Maureen Dowd: Obama Should Take A Page From Christine O’Donnell 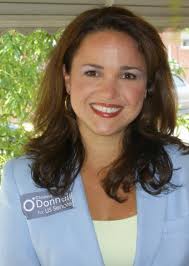 The country may have finally produced a political candidate that can not be made more ridiculous by Maureen Dowd. In fact, one wonders if the over-the-topness factor of this year’s midterm candidate roster might not turn Dowd away from her reliable zingers into some sort of staid and snoozy columnist. Today Dowd jumps into the Christine O’Donnell fracas.

As the witchcraft metaphor has already been handily provided for her, all that’s left for Dowd to do is reflect that perhaps President Obama could use a little more passionate fantasy in his presidency (though thankfully she refrains from any Gandalf comparisons).

We the People in the Ruling Class Elites do think O’Donnell comes across as alarmingly loopy. But maybe she’s smart as a fox in doing a Single-White-Female, Fox anchor makeover to look more like her queen-maker, Sarah Palin.

She’s also smart to think of politics in terms of passion and myth — two elements Barack Obama was able to summon during his campaign that are sorely missing from his presidency.

She might have gone a broom too far, though, when she once told Bill Maher that she had “dabbled into witchcraft” and went on a date with a witch that included “a midnight picnic on a satanic altar.”

Obama’s bloodless rationality has helped spawn the right’s bloodletting of irrationality. His ivory tower approach to the nation’s fears and anxieties about the economy gave rise to a tower of angry babble. Tea Party is basically a big tent for anger…The president seems put upon and impatient with reality while his foes seem happy to embrace fantasy.

Interestingly, MoDo also seems to think that the departure of Rahm Emanuel spells passionate doom for the White House: “All the blood will drain out of the White House. And Obama can go to Ben’s Chili Bowl for lunch every day and it won’t matter.”