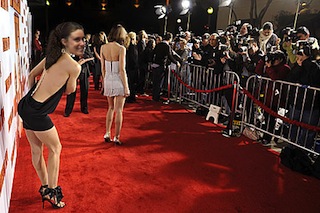 (WARNING: As will be abundantly clear, everything in this piece is fake. This especially includes the quotes.)

The trial may be over but it looks like Casey Anthony fans won’t have to wait long to see their favorite stars back in action! Variety is now reporting that the media, using other big entertainments like the Pirates of the Caribbean and Matrix movies as a template, is now preparing to cover two more Anthony trials back-to-back. The new trials are set to be released, covered, analyzed, debated, have the analyzation analyzed, re-covered, and live streamed early next year. 2012 can’t come soon enough!

In a joint statement, executives from all of the news networks explained their excitement about the new projects:

“We’re thrilled to be continuing this great franchise. While the original trial was originally conceived as a standalone, it became clear early on that there were so many more stories to tell in this world. Future entries can detail the further dissolution of the Anthony family. They can also follow up on the fascinating thread opened up in the last moments of the original which reveals the jurors to be the true super villains of the story. Who knows what fun stories the media will come up with? Really, we’re just happy to be in the Casey Anthony business!”

While the executives may be happy, the real beneficiaries are the fans. Mediaite caught up with some diehard Anthony trial fans (or Tri-Hards) outside of the Florida courthouse where they were still gathering for some reason to get their reactions to the news.

“I can’t wait!” exclaimed Bridget MacAllary who had driven all the way down from New Jersey. “Following this story is just like the best soap opera ever. Only, here, the lives being ruined are real! I love that!”

Sitting near her was Georgia resident Cath Bertrand who showed off her “Team Caylee” t-shirt which she had purchased on ABC’s official store.

“I’m definitely following this story for little Caylee. I love reading about that girl! Especially about the horrible way in which she died. The more graphic the description the better! Those news stories help me feel emotions again!”

Bertrand then removed her sunglasses to show that her eyes were, in fact, cold and soulless inside.

Of course, the real question now is whether or not a new child will be killed for the trial’s sequels. Entertainment Tonight caught up with Casey Anthony herself while the former mom was attending a movie premiere and fending off vigilante attacks.

“I’m really not allowed to give away any details,” Anthony said. “I will say, though, it wouldn’t be a trial sensation without the decayed body of an innocent toddler!”

One element of the original that’s sure to be back is surprise star Nancy Grace. Grace, of course, was originally supposed to play the smaller role of an impartial, unbiased observer reporting facts, however, she quickly became a fan favorite after taking a more active role in the proceedings. The Insider asked Grace about the sequels and received this comment:

“I am thoroughly TOT MOM excited to be a part of this TOT MOM wonderful project. It’s a pleasure to work with TOT MOM this wonderful TOT MOM cast and crew again and I’m sure we’ll do our TOT MOM best for the TOT MOM sake of the fans. And TOT MOM for the sake of little Caylee TOT MOM. All of TOT MOM this is for TOT MOM TOT MOM her.”

Currently, the media is hard at work preparing the scripts for the upcoming trials. Even some writers not expected to return will be there. For instance, Mediaite Contributing Editor Jon Bershad, who was fairly vocal in his opposition to the trial’s coverage, will be involved with the coverage of the sequels.

“I may have said some stuff about how gross it is that people are obsessed with this story but, if you look on the site, I wrote like a third of Mediaite’s posts about it. Sure, they made me sick to my stomach to write, but they all got great traffic and getting great traffic means I can go home earlier. It might be nice to have scruples but, it’s like I always say, scruples don’t get me to Happy Hour any sooner. Hey, where’d that lady you interviewed earlier get those sweet sunglasses?”

Until 2012, the nation’s Tri-Hards will have to sit tight and wait for the further drama and plot-twists of this wonderful story. Until then, lets hope a politician ruins his marriage or something. That’s always fun.