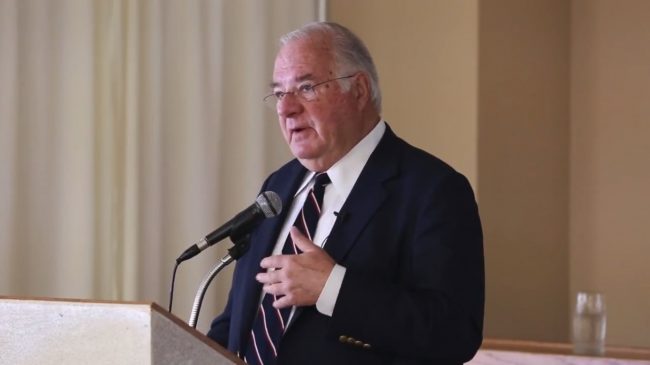 A week after the employees at the Gothamist and DNAinfo — two New York City websites the focus on local news stories — decided to unionize, billionaire owner Joe Ricketts suddenly shuttered the sites. Reportedly, Ricketts gave the journalists no advance notice he would be closing them down, as they stated they felt “blindsided.”

As one would imagine, the notion of a very wealthy man shutting down news outlets and killing dozens of jobs for seemingly vindictive reasons didn’t sit well with other journalists and reporters. And they teed off on Ricketts this evening:

tax the fuck out of billionaires like Joe Ricketts and provide public funding for local journalism.

remember Joe Ricketts name, someone who stomps on workers unionizing & destroys their archived work is someone who will reappear in scandal https://t.co/EUaFcgsbEX

Joe Ricketts is scum. The union will stand with DNA/ Gothamist people and everyone with a conscience should stand up for them right now

dnainfo/gothamist reporters now doubly fucked because their websites — with all their clips — are gone. imagine applying for a new job now

Joe Ricketts is 76. He just deleted the work of hundreds of good young journalists, and pissed off all their friends. Good luck maintaining a legacy, Joe!

Another thing that didn’t sit well with those in the media was the fact that Ricketts completely took the sites down, making it impossible for the now out-of-work journalists to access their past work to use on their resumes.

Journalists at @Gothamist @DNAinfo @DCist @Chicagoist @LAist: follow these steps to preserve your own archives:

If only Joe Ricketts could have scraped together the money to keep Gothamist and DNAinfo up long enough for writers to save their clips. pic.twitter.com/XUx3h6dJn4

Taking down gothamist and DNAinfo's archives cripples the reporters who worked there. They won't have online clips in their job hunts.

Taking down the DNAInfo and Gothamist archives is really fucked up, for the city and for the reporters there who need their clips.

Others also noted that not keeping the archives up would take away some great reporting:

DNAinfo broke quite a few stories about police brutality. Not only shutting them down, but wiping their archive, is a political act.

Gothamist was one of the first sites to cover #AuditTheVote and write about the Russian hacking of the election after Trump won. Now we can't access that article because Joe Ricketts, a Trump backer, shut down the site after the workers voted to unionize. https://t.co/y5afgmxpMD

One reporter made the claim that the this was part of an intentional trend:

Gothamist, Gawker, Village Voice, DNA Info, all gone within a year…. they're trying to end independent media, and it's working.

And another journalist helpfully shared a list of Gothamist/DNAinfo staffers that other outlets should hire:

I made a Google doc of all the journalists you should hire because Joe Ricketts laid them off: https://t.co/kTBVi6d9C6