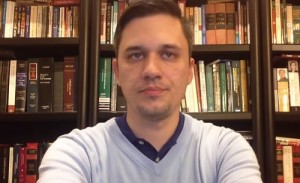 A Florida senate candidate running as a Libertarian admitted to killing a goat and drinking its blood in the Mojave Desert following rumors of the alleged event.

In an interview with the Orlando Sentinel, Augustus Sol Invictus (yes, that is his legal name) confirmed the rumored event in the hopes of shedding some light on what he believes is a smear campaign being run by the Libertarian Party of Florida. “I know that’s probably a quibble in the mind of most Americans,” he said. “I sacrificed an animal to the god of the wilderness… Yes, I drank the goat’s blood.”

As for the “smear campaign,” party chairman Adrian Wyllie resigned his position in order to highlight the many problems with Invictus’ campaign — the least of which is the dead goat.

“He is the absolute exact opposite of a Libertarian. He’s a self-proclaimed fascist. He’s promoting a second civil war,” said Wyllie. “It’s absolute insanity. We must explain to people this is the opposite of Libertarians. This guy has no place in the Libertarian Party.”

In response, the 32-year-old lawyer — whose legal name is a Latin phrase meaning “majestic unconquered sun” — indicates his four Hispanic children as evidence for his not being a white supremacist. As for promoting war, the candidate argues that “the government already is at war with its citizens and that it’s certain to escalate.”

Invictus admits that his running as a Libertarian, a party affiliation he won’t change despite Wyllie’s complaints, is a “longshot.” His candidacy’s chances are even worse now that (a) voters actually know who he is and (b) he came out and confirmed his pagan story, but the lawyer doesn’t seem to mind. “If not elected, I still think there is a purpose for all of this and that is to get a message out there, waking them up.”

You hear that, Florida? A guy whose changed his name to a phrase from a long-dead language, killed a goat and drank its blood thinks you’re all a bunch of sheeple who need to wake up.