Message From The Future: Your Grandkids Would Really Like You To Stop Talking About Gay Marriage 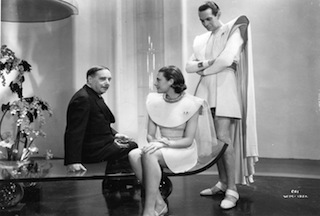 Those of you who know me know that being a Contributing Editor here at Mediaite isn’t my only job. Two days a week, I also work as an intern in the lab of a quirky yet lovable mad scientist. Usually it’s just boring office managerial stuff but, this weekend, he let me test out his new time machine! It was awesome! Anyway, while I was in the future, I ran into your Great, Great, Great, Great Grandson and he asked me to deliver a message to you. Apparently he and the rest of the family would really like you to stop talking about gay marriage now.

Yeah, it was totally crazy! I was just driving around town (Still no flying cars. Apparently they’re incredibly dangerous and impractical) when I started up a conversation with this guy at a traffic light. Noting that my clothes weren’t made of polyester and included no shoulder pads or antennae, he guessed that I was from the past. I said I was and that I was from the early 21st century. He then asked if I knew you! Isn’t that the coolest? What a small space-time continuum we live in!

Anyway, he offered to show me the best place to get Future-Coffee so we got to chit chat for a few minutes. That’s when the topic of gay marriage came up.

Remember those comments you wrote on all those news articles about New York legalizing gay marriage? The ones about New York being a cesspool of perverts and America’s morals being ruined and gay people trying to destroy the country? Yeah, it turns out that your descendants have read them and are totally embarrassed.

I know what you’re thinking; “How are they seeing these comments, I used an online pseudonym?” That’s what I wondered too! However, he explained to me that in the future, everyone’s names are a combination of their last names and screen names (one day I’ll be Jon Bershad-Chickmagnet34!) so, every time they search for themselves online, the comments come up. Also, a couple centuries from now, Ken Burns the IX is going to use one of them in a documentary about bigotry in this time period.

To make matters worse, your GGGGGS also told me that some of your descendants end up being gay. Those folks are really embarrassed. Hurt too! He also claimed that you have some gay family members now too. Apparently they’re just afraid to tell you. Isn’t that weird?

I know this is all pretty crazy but my trip didn’t end there! After hitting up the future, I decided to check out the past a little and, as unlikely as this sounds, I happened to run into your Great, Great, Great Grandfather as well! Unfortunately, he’s kind of pissed off at you as well.

Don’t get angry at me but I told him all about you and he was really upset about your friends. You know your good buddy, the one who’s of a different ethnicity than you? Apparently your Great, Great, Great Grandfather doesn’t want you hanging out with him any more. He explained that it was morally wrong and that you’re degrading yourself by even treating that guy as your equal. Pretty nasty, huh?

Anyway, I felt really bad about getting him all worked up so I offered to take him back to the present and show him that you’re actually a pretty good person. However, the instant we got here, he saw a car and totally freaked out. He just started screaming and making a scene. No offense, but it was really uncomfortable and he kind of looked like an idiot.

It’s almost as if refusing to adapt to the clear societal progressions that happen over time makes a person seem like a bit of a moron.

All in all, it was a totally awesome trip. I’d love to tell you more about it but I think I accidentally stopped my parents from meeting and I might not exist soon. Better go fix that! Talk to you later!