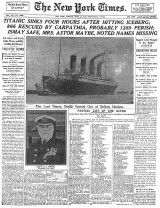 The newest addition to raging debate over “how can we save media!” is Michael Arrington’s suggestion today that the New York Times top journos should wise up, depart the (sinking) mother-ship and launch their own Politico-esqu news organization.

[Politico’s] news room is 100 strong and they have more people in the White House Bureau than any other brand. They have roughly the same traffic as [TechCrunch] – 7 million monthly visitors – but they’ve been around just half the time. How did they do it? The site was founded by well known political journalists who bailed to start their own company. They took their personal brands and credentials with them, and the readers followed. Today they are profitable – largely because they launched a three-day-a-week print version of the site. Amazing. Print isn’t dead (yet). Just the overhead is.

What if that group, the most valuable assets that the NYTimes controls, simply walked out of the building and started their own company? What would that look like?

It’s an interesting idea. What if they did? (Something Arrington admits that is unlikely to happen.) Who would those top journalists be? Would they be plucked from across the board? Would the top two people from each section depart in some sort of media version of Noah’s Ark.

The point that Arrington appears to miss is that one of the reasons Politico is such a successful operation is that it’s a niche operation. It has gathered top political reporters and made itself dominant in just one area, not all areas as the Times — and most other national papers — attempts to do (and arguably does better than anyone else). Politico is able to run a sleek organization because it’s not required to staff itself to meet every global news need.

Perhaps the equivalent would be if the the Times spun off all its news sections into different niche organizations (something David Carr sort of alluded to back in February). He also misses the power the brand ‘New York Times’ holds over the public. It may not be the first word in news, but it is still arguably the last, as well as the measuring stick against which everything else is compared. Would that power depart with those journalists? Not for a long time one suspects.