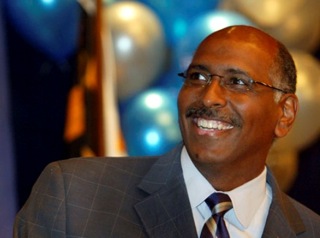 Michael Steele made clear today that he completely opposes any work the NAACP does with Planned Parenthood. In a discussion with radio host Laura Ingraham today about the reproductive rights organization, he agreed with her that the relationship between African Americans and Planned Parenthood had been a tense one, as the organization employed “the use of abortion to eliminate and limit the number of African Americans.”

“Planned Parenthood was founded by Margaret Sanger, who sought to control the population of the undesirables and black and brown Americans were in her crosshairs,” Ingraham asserted, to which Steele agreed, and argued that he did not understand how it came to be that African Americans supported groups like Planned Parenthood. “It is one of those twists of history that I’ve yet to understand,” he noted, “and how when you look at something like the NAACP signing up with an organization like Planned Parenthood that has as part of its history and its charter and its existence… it’s just beyond the pale to me.”

He did consider that the incompatibility of the two groups helped conservatives by “creat[ing] an opening for our voice to be part of the conversation” by talking about values, not just politics. “I think we can still speak to them in a way that is very attractive and very appealing and it takes the politics out of it the way… when you get to the politics, then it becomes Dems and Republicans, and left and right. But I think when you speak on the value messages, a number of folks said to me over the years that resonates a lot better.”