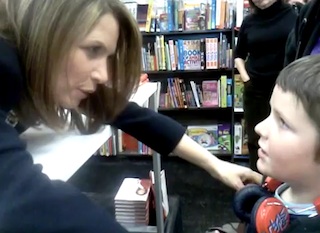 Michele Bachmann was in South Carolina recently and stopped by a book store to do a signing of her book, Core of Conviction: My Story. While there, she was approached by an 8-year-old boy who shyly shook her hand and spoke quietly. Bachmann was forced to lean in and hear what he said and got quite a shock when she did. The boy was saying “Miss Bachmann, my mommy’s gay but she doesn’t need any fixing.”

The video of this whole situation has, unsurprisingly, gone viral. However, I’ve got some very mixed feelings about it.

On the one hand, the views of Michele Bachmann and her ridiculous husband are hateful, ignorant, and should disqualify her from any public office. The very notion of her being President while actively engaging in the in the alienation and disparagement of a large portion of this nation, disgraces the very office of Commander in Chief. The Tea Party may want to go back to the time of our founders but, this isn’t the 1700’s, it’s 2011. That kind of filth doesn’t fly any longer.

On the other hand, it very much looks like this boy is getting pushed into doing something he doesn’t want to do. The images and quotes from this make it seem like a powerful moment, an innocent child forcing a woman to look at her own evil. But that’s not what I’m getting from the actual video.

This isn’t spontaneous. The camerawoman (the boy’s second mother presumably) is ready to capture it all and apparently looked suspicious enough that we can hear her explaining herself to someone (security?) as the tape begins. The mother on camera has to prompt the boy twice. The second time, he covers his eyes in embarrassment. He doesn’t look like a crusader. He looks like a kid being forced to thank his aunt for an ugly sweater. He looks like a prop.

Seeing those images, I wanted this video to be something it wasn’t. And, possibly, something it couldn’t have been. For the boy to truly denounce Bachmann’s views, he would have had to really understand them and, fortunately for him, he’s too young for that hate.

Whether you agree with the the words the boy’s been scripted to say or not, it’s still a script. And whenever you force a child to get in an uncomfortable position and read from a script, it makes me uncomfortable.