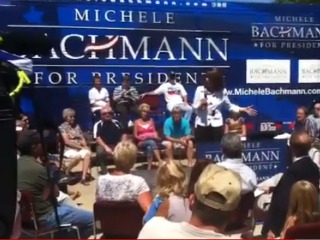 Congresswoman Michele Bachmann has finally responded to the controversy surrounding the unflattering photograph and accompanying headline (“The Queen of Rage”) that Newsweek selected for its most recent cover.

At an outdoor town hall in Atlantic, Iowa, the Republican presidential hopeful was asked about the cover. Bachmann says she’s yet to see it for herself, but was then told about the cover line by the individual posing the question, who also added that the image used was a “big close-up” and “wild-eyed.” Bachmann, to her credit, acted as if she didn’t care much about the cover one way or another, and chose instead to shift focus to her campaign and plans for the future.

There were myriad ways Bachmann (who, as we’re all aware, has dealt with this exact same brand of crap before, perhaps most notably from former MSNBC pundit Cenk Uygur) and her people could have handled this, and choosing certain paths would have definitely risked lending Newsweek further publicity for what really does appear to be, let’s be honest, a calculated publicity stunt. She could have blamed the media and painted it as a left-wing enterprise conspiring against her or against conservatives or the Tea Party or women… But she didn’t. She didn’t play the victim. She acted like it doesn’t matter because, truly, such attacks on candidates and other public figures shouldn’t matter. In one fell swoop and with an economy of words, Bachmann was able to simultaneously make Newsweek appear foolish and her campaign come across as not only thoughtful and serious but also — especially important after the events of this weekend — positive. Hopeful, even.

Have a look at her reaction, below: