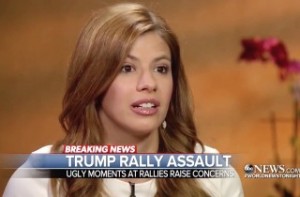 “I do not want to be a pawn in a political campaign.”

These days it would be quite easy to replace Stormin’ Norman with an embattled Michelle Fields. Because without question, she is being used by some as nothing more than a pawn against Donald Trump and his (suddenly unsteady) march to the chaos in Cleveland otherwise known as the GOP convention. But before we get into the meat of this, let’s review the events of the past two weeks regarding Fields, Trump campaign manager Corey Lewandowski, Trump’s reaction/handling, and the overhead video that has now been seen more than the Zapruder Film.

The incident: I’ve looked at this video at least 100 times (it’s hard not to when played in a continuous loop on cable news like a radar image of an impending hurricane approaching land) and here’s the objective conclusion from someone who doesn’t have any skin in the game (and that’s an important point that will be visited later):

– Michelle Fields should not have touched Donald Trump in any capacity. The press conference was over. Yell a question at him, sure… that happens all the time. But she should not have been that close and certainly shouldn’t have been in physical contact with him.

– That said, that did not give Lewandowski any right whatsoever to grab Fields in any capacity. It’s not Lewandowski’s job… he just thinks it is if other recent incidents are any indication.

– Lewandowski and Trump absolutely should have apologized to Fields instead of resorting to a smear campaign. Lewandowski should also acknowledge that he did touch Fields, which he said he hadn’t in his initial reaction.

– Still… Fields should acknowledge that her initial testimony of the incident wasn’t exactly accurate, either. Per Fields on Breitbart.com the following day:

“Trump acknowledged the question, but before he could answer I was jolted backwards. Someone had grabbed me tightly by the arm and yanked me down. I almost fell to the ground, but was able to maintain my balance.”

Was she grabbed? Yes. Did she almost fall to the ground? Not even close. Again, that does not justify Lewandowski’s actions, but it doesn’t give Fields the right to hyperbole either.

So in a 2016 world where one side is absolutely wrong and the other side positively right with no grey area in between, we have another situation where both sides were wrong. Of course, this can’t be articulated on the dozens of cable news segments that have tackled this situation, because nuance and shared responsibility simply doesn’t fit the annoyingly-argue-with-each-other-for-seven-minutes-while-conceding-nothing format that has existed since the beginning of time (otherwise known as 1996).

In the end, this incident should have been settled via a simple apology from the Trump camp to Fields. But nothing is simple in this campaign season, so we’re treated to wall-to-wall bickering on the topic because some are using Fields as a pawn to advance a cause against Trump. This includes the 16 conservative female journalists — relatively big names like Dana Loesch , S.E. Cupp and Mary Katharine Ham — who signed a petition calling on Trump to fire Lewandowski in the name of protecting Fields’ honor.

In a related story, it appears almost every one of these 16 has been vocal about their opposition to Trump for months now. And look, that opposition is fine and understood given the billionaire’s warranted high unfavorables among women in general (currently sitting in the 70s among registered voters). Again, nobody is defending Trump here, but let’s stop pretending this petition is more about Fields’ dignity and less about an attempt to damage Trump… because it’s almost insulting to portray it otherwise.

Also ask yourself this and let’s be honest: If this incident occurred and John Kasich or Bernie Sanders or Ted Cruz or Hillary Clinton’s campaign manager had done the same thing to Fields, do you really think we’d even be hearing a peep about this? That’s not to say Fields wouldn’t have complained about being grabbed… she had every right to. But would anyone have cared to the point of signing a petition asking for termination of the campaign manager? Know this: It would barely be mentioned and likely to chalked up to unfortunate press scrums that happen all the time on the campaign trail.

Another question to self: Where was outrage from the journalism community when it revealed Fox’s James Rosen had been spied on, spied on, by the Department of Justice while comically naming him as a possible co-conspirator in violation of the Espionage Act. Said spying included that of Rosen’s parents and went through the reporter’s personal email. But since Rosen — as consummate a professional as there is in the business — didn’t have a sensational or polarizing political angle to the story (see: Trump/Lewandowski), almost only conservative media made some noise about the Rosen revelations while traditional media yawned. And of course, there were no petitions against President Obama or his justice department then. Just mostly silence…

It’s truly unfortunate what happened to Michelle Fields. At just 28, her entire career, her life, has been turned upside-down. She has wisely stayed off the radar for a few weeks in an effort to not make the story about herself after a doing some high-profile guest appearances following the incident (which made it easy for critics to accuse her of exploiting the situation in an effort to get major airtime on places like The Kelly File and Good Morning America).

It makes one wonder if this will ultimately lead to bigger things for her once Lewandowski’s Simple Battery Trial of the Century on May 4th concludes and the smoke clears.

Or…will she be seen as a drama queen who isn’t worth the headache of bringing on board?

Hopefully Fields gets another chance in an industry that is as cutthroat as any. She didn’t ask for any of this…

But what she doesn’t need right now are media members with their own agendas using her as a pawn to carry out their own objectives when it comes to a certain presidential candidate.