Huckabee vs. Palin: Which 2012 GOP Contender Is The Bigger Media Star?
chart

Huckabee vs. Palin: Which 2012 GOP Contender Is The Bigger Media Star? 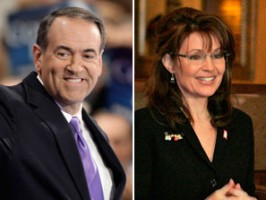 Less than two weeks ago, it seemed perfectly valid to wonder whose media influence was greater: Mike Huckabee or Sarah Palin. Now, as all of television, print and online media finishes Going Rogue, the contest no longer seems fair. Palin has absolutely pulled away, becoming as ubiquitous (or more!) than she was during the 2008 election, in a matter of weeks. But three years is a long time. Can her popularity possibly last?

Though it seems silly to compare them today, we’ve all heard the fable about the hare and that pesky, consistent tortoise. Could that be Huck? Mediaite’s Steve Krakauer runs down the pair’s media influence below with an eye on the long view. After a tumultuous Palin-filled week, the matchup can be seen in a new light.

Two of the current top contenders for the 2012 GOP nomination are Mike Huckabee and Sarah Palin, and unlike their competitors (Mitt Romney, Tim Pawlenty, maybe Newt Gingrich) they have a secret weapon – the media.

Besides being political stars, they also have huge media platforms. But who is the bigger media star?

Before we get to the tail of the tape, Politico talked to Huckabee this week and he contributed some trash talk (as trash-talky as a minister will get) for our forthcoming battle:

“Some of the people who had excoriated me and really been very dismissive of me for views that I had taken, and labeled me anything from a populist to an ignoramus – the same people have been very defensive [of] and laudatory to Sarah Palin,” Huckabee noted, adding that he’d invited her to appear on his weekly Fox show but “could never get any contact.”

“I’m glad she’s getting the props – I know I’m not nearly as attractive.”

He really just said that, right? Meghan McCain is not going to be happy about this.

Anyway, let’s get it on: