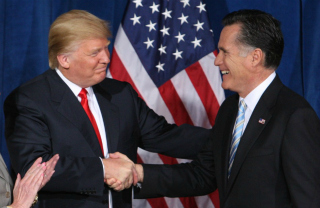 Tuesday evening, presumptive Republican nominee Mitt Romney will appear at a Las Vegas campaign event with business magnate Donald Trump. Many have already criticized this decision due to Trump’s fixation on President Obama‘s birth certificate, but I propose another reason Romney should dump Trump: the “business magnate” is actually a crony capitalist, a businessman who has made much of his wealth by utilizing the power of government. In other words: the antithesis of how Mitt Romney should present himself.

On Sunday, conservative commentator George Will called Trump a “bloviating ignoramus,” adding that the cost of appearing with Trump is high, without any clear benefit. This is probably all true, yet somehow it doesn’t stop Romney from happily accepting the Trump endorsement. When asked about Trump as a political liability, Romney dismissed the criticism saying that while he may not agree with all his followers, he appreciates their support.

Fair enough. But let’s put aside the goofy sloganeering and silly birtherism for a moment. What should also bother the Romney campaign are some of Trump’s actual business policies.

The narrative thus far has been that Trump is the archetypal successful capitalist who thus has keen insight about which candidate is best suited to “fix the economy,” and so he has chosen Mitt Romney, another successful businessman. Upon accepting the endorsement, Romney played into this narrative, saying Trump has “an extraordinary ability to understand how our economy works and to create jobs.”

To be fair, Trump has created jobs, and has built a successful business (sans the multiple bankruptcies).

But Trump is not just shamelessly self-promoting; he’s shamelessly crony capitalist. He often tries to expand his business by using the power of government. And in an election where the Republican candidate will claim that entrepreneurs — not the government — can create jobs and prosperity for all, Trump’s record makes him a liability.

The conservative National Review pointed out that Trump has a history of avoiding the free market and instead getting in bed with the state. Last year, they wrote that “Trump became ‘partners’ with the City of New York to build a hotel in the 1970s — a deal that involved a 40-year property-tax abatement that saved him ‘tens of millions of dollars.'” A “tax abatement” may seem harmless, but it’s really no different than a government subsidy. When people refer to sports teams as “welfare queens,” it’s partly because the owners receive such large tax abatements. Trump’s case is no different.

In the 1990s, Trump asked Connecticut’s government to use their power to condemn five Bridgeport businesses so that he may use the land to build “a $350 million combined amusement park, shipping terminal and seaport village and office complex on the east side of the harbor.”

Around the same time, Trump tried to buy an Atlantic City woman out of her home so that he may build a parking lot and waiting area for his hotel’s limousines. The widow refused to sell her property, so Trump spent years under the guise of “eminent domain” trying to get the government to pry the woman’s land for his private use.

Luckily, In both situations, Trump lost out. But when, in 2005, the Supreme Court essentially ruled that eminent domain may be used for private development, Trump applauded the ruling. Does Mitt Romney really need the “businessman” approval of someone who seems to have such little regard for private property?

One final example: Trump fought tooth-and-nail to prevent a casino from being built in upstate New York. He rightfully feared the competition it would provide to his casinos in New Jersey, and so he spent a decade in court fighting the construction, claiming that gambling would be terrible for New York (but magically, somehow not bad for Atlantic City?). When the NY casino plan was finally green-lit, Trump conceded that “at some point, there is going to be competition.” No, really?

Romney’s campaign will be largely based on his past as a successful businessman. In that role, would he have invested in Donald Trump? I doubt it.