Mother Of Slain Benghazi Officer To Sean Hannity: ‘They Want Me To Shut Up’ 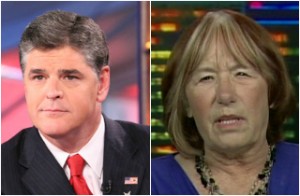 On Friday, Sean Hannity brought Pat Smith, mother of the late Sean Smith, on his radio program. The 34-year-old information management officer was one of four Americans murdered in the Benghazi embassy attack on September 11, 2012.

In the chilling interview, a distraught Ms. Smith, in tears, pleaded for answers and spoke of the efforts to silence her.

Ms. Smith first relayed how her son, prior to the attack, requested additional security in advance and warned the State Department:

He did tell them, ahead of time, he typed it into his little typewriter over there, that they were going to be attacked, ‘please they needed more security,’ and they were ignored. And I don’t appreciate everybody going to bed and going to sleep and not taking care of the guys that they put in harm’s way, one of them being my son.

[Ms. Smith is likely referring to reports that President Obama went back to bed after learning of the attack on the compound.]

When Hannity asked how many times Sean warned the State Department or whom he warned, Smith replied:

My son himself told me that he warned them…. He said: ‘I told them, I sent messages’…. He was on the tele-type of whatever it is… he was on there telling them, just before it happened, and that the guy out there was taking pictures of the place. He was telling them that. He was a communications guy and he was communicating that.

Smith then spoke of the intimidation she has experienced, in her quest for answers, noting she is being silenced, though Hannity clarified it is not by someone in the government:

They don’t tell me much. They want me to shut up…. I was told, and I really would rather not say by who, [though] I can if you need it, but I was told that I’m causing a lot of problems and to shut up…. I told them ‘I will not! I will not shut up until I find out what really happened!’

During the ceremony when the caskets returned, Ms. Smith, who attended and sat next to Colin Powell’s wife, described her interaction at the event with President Obama and Hillary Clinton:

SMITH: The President? I cried on his shoulder. And I was crying there and he’s patting me on the back and looking around to who he’s gonna talk to next. So I didn’t feel any comfort there. Hillary? I cried on her shoulder also, but she paid a little attention to me then walked off. Panetta took my face in his hands. I asked him: “Please, please let me know what happened, I’ve got to know!” And he took my face in his hands and he says, “Trust me, trust me. I will get back to you. I will let you know.” And guess how much I’ve heard from him since?

SMITH: You got it.

Smith and Hannity discussed the importance of answers on the Benghazi attack in order to ensure this does not happen again:

SMITH: I am so disappointed in my government for the way they’re playing this. What they’re playing is politics. And I don’t want to know everything that was going on over there. I know it was secret….

HANNITY: You have a right to know the truth. And you have a right, if your son told you, as he did, he knew that there was an attack coming and he warned them and they did nothing. That means that your son’s death could’ve been prevented and we have an obligation to every single person that is serving this country that this never happen again. It should have never happened to your son or Ty Woods—

SMITH: That’s the reason I keep opening my mouth about it. I want someone to admit it so that it won’t happen again. So that there’s safety there….

Hannity noted how trying to cover this story is “very frustrating,” with Ms. Smith wryly noting: “I know, you won’t find the answer. I’m told it’s too high up.”

The silver lining? Sean Smith will be honored at an award ceremony on May 3rd but Ms. Smith was told she would have to pay her own way. As Ms. Smith’s income is limited to Social Security benefits, she could not afford to attend. Hannity balked at the idea that we justify costs for the First Family’s vacations and the White House concert series and parties, while “the mother of a slain hero from the Benghazi tragedy, which they screwed up because they didn’t listen to your son,” is not accommodated. Smith received a nice surprise – Hannity offered to pay for all her travel expenses (hotel, round-trip airfare, meals), as well as her guest’s, so that she can attend the ceremony, encouraging Smith to order a “big expensive steak dinner on me… with lobster on the side and a big bottle of wine.” A relieved and emotional Smith happily accepted.