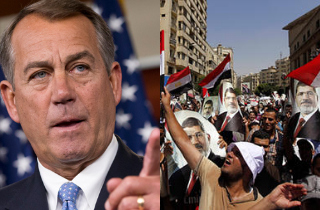 Every a.m., Mediaite publishes a primer of what the interweb machine is writing, talking, tweeting, and blogging about, so that you may fool friends and family into thinking you are a trove of information and insight. Today: the GOP wants in on the anti-poverty discussion, Egypt is arresting people by the dozens when they should be freeing prisoners, what happens when the pro-life cause and pro-Israel cause collide, and more.

With Democrats renewing a focus on income inequality in the new year, Republicans are trying not to be left out of the conversation. Senator Marco Rubio (R-FL) is going on the offensive with a speech about poverty, while Republican lawmakers are making sure that Democratic initiatives like unemployment insurance and minimum wage are never far, in either the discussion or in the negotiations over the actual bills, from Obamacare and the Keystone Pipeline.

Via Greg Sargent, Democrats are fighting back by going after House members voting against the UI extension who are also running for a 2014 Senate seat. This could put GOP leadership in a bind: Boehner et al are open to a UI extension if it’s coupled with a “pay for,” but conservative groups like Heritage Action are opposing the extension even with the offset. Contested GOP primaries could put additional pressure on House Republicans to oppose the extension, setting up yet another battle between House leadership and the caucus.

Meanwhile, Washington Examiner’s David Drucker reports that while Republicans plan to put on a public display of concern over the expired benefits, privately they are not overly worried that their opposition will cost them.

Baker considers the al Qaeda resurgence in Iraq set against Obama’s options after inheriting the war from his predecessor. (See how polite I was about that? Not a single Mission Accomplished crack.) Obama’s full-scale withdrawal has its critics, but few can say with any degree of confidence that American presence in Iraq would defuse the conflict rather than escalate it. Meanwhile, the U.S.’s ability to support Iraqi Prime Minister al-Maliki with weapons remains limited, and the American public is done with the country. The only viable option would appear to be trusting al-Maliki to soften his tone toward Sunnis in hopes of deflating support for attacks. As Secretary of State John Kerry put it the other day, this is “their fight.”

The Egyptian military’s crackdown on the Egyptian Brotherhood continues apace, with 63 Brotherhood members sentenced to three-year prison terms today. The government that succeeded deposed President (and Brotherhood figurehead) Mohamed Morsi recently declared the Brotherhood a terrorist organization, essentially criminalizing membership, and in the case of recently-arrested Al Jazeera reporters, reporting on the group.

On that note, Marc Lynch argues that international recognition—for which Egypt’s military government longs—should be withheld until its political prisoners are free, and advises observers to see the crackdown on the Brotherhood as metonymic of the government’s larger problem with activism:

Egypt’s security services were able to tap into well-cultivated mistrust of the Muslim Brotherhood at home and abroad to justify its initial crackdown. But the intense animosity between the Brotherhood and many activists shouldn’t mask the reality that the campaign against the “terrorist” Muslim Brotherhood and the campaign against other political activists and independent voices are manifestations of the same political project. Both aim at crushing the culture of protest which overthrew former President Hosni Mubarak and restoring the “normality” of a carefully managed authoritarian regime. The arrests and public defamation campaigns aimed at restoring the fear and disengagement which has always been so vital to maintaining authoritarian regimes.

BF’s Kate Nocera has a good catch: what happens when conservative allegiances collide? If the allegiances are support for Israel and opposition to abortion, it looks like Israel wins, at least judging by the muted reaction from congressional Republicans to Israel’s new move to publicly fund abortions for young women. Calls about the new law hit most legislators’ voicemails, and the few who did talk to Nocera about the issue ended up giving themselves wedgies.