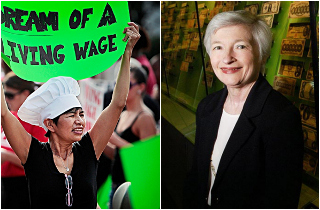 Every a.m., Mediaite publishes a primer of what the interweb machine is writing, talking, tweeting, and blogging about, so that you may fool friends and family into thinking you are a trove of information and insight. Today: unemployment benefits might not make it through the Senate, but a new Fed Chair probably will; what’s next in the war over Obamacare; the untold effects of raising the minimum wage; and more.

A bill to extend $6.5 billion in long term unemployment benefits is four votes short with only hours to go. After Congress failed to interpolate the benefits into the year-end budget deal negotiated by Representative Paul Ryan (R-WI) and Senator Pat Murray (D-WA), the benefits expired for about 1.3 million people at the end of the year. Republicans object that the new three-month extension lacks a “pay for,” i.e. an off-set of either spending reductions or revenue enhancements, while the bill’s sponsors argue that unemployment benefits have historically been considered emergency finding.

With fifty-five Democrats in favor of the bill, and Senator Dean Heller (R-NV) a co-author, the extension is still four Republican votes shy of passing cloture in the Senate—not that it would get anywhere in the House.

Meanwhile in things the Senate might actually get done: confirming the first-ever female Chair of the Federal Reserve. Despite some noise from Senator Rand Paul (R-Look at Meeeeee), Janet Yellen appears poised to be confirmed on Monday evening.

“After Obamacare Is No Longer Doomed, It Will Become a Scandal” (Jonathan Chait, New York)

Chait wonders what happens to Obamacare opposition once the law doesn’t cause doctors to flee burning hospitals full of Bolsheviks. Prediction: it will be pitched less as a disaster than as a scam:

Obamacare will neither collapse, nor will Republicans accept its legitimacy, but the nature of their opposition will instead slowly morph. Gleeful predictions of imminent collapse will give way to bitter recriminations at the nefarious tactics used to make the law work. Obamacare will cease to be the something certain to destroy Obama and become something Obama has gotten away with…The hapless Obamacare is slowly giving way to the devious Obamacare.

That’s a significant increase in the quality of life for our worst off that doesn’t require the government to tax and spend a single additional dollar. And, given that this policy is self-enforcing with virtually no administrative costs while challenging the employer’s market power, it is a powerful complement to the rest of the policies the government uses to boost the living standards of the worst off, including the Earned Income Tax Credit, food stamps, Medicaid, etc.

[…] As many economists have argued, the minimum wage ”substantially ‘held up’ the lower tail of the U.S. earnings distribution” through the late 1970s, but this effect stopped as the real value of the minimum wage fell in subsequent decades. This gives us an empirical handle on how the minimum wage would help deal with both insufficient low-end wages and inequality, and the results are striking.

Even those who disagree with the policy don’t dispute the impact raising the minimum wage would have on those in the lowest income bracket, which is why opponents are left objecting to the little it helps those in the middle class.