Nancy Pelosi in Meeting With Trump: ‘Are Women Allowed to Speak Here?’
Opinion

Nancy Pelosi in Meeting With Trump: ‘Are Women Allowed to Speak Here?’ 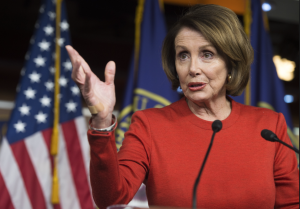 After Attorney General Jeff Sessions announced earlier this month that President Trump would rescind the DACA program which protects the right of undocumented people brought to the country as children to live and go to school in America, mixed reports — and tweets — are saying a lot of different things.

A deal with the Democrats on protecting undocumented people was widely reported on until Trump denied that any deal had been reached, and since then there’s been no shortage of back and forth. But in either case, there were a few telling moments from a report by the Washington Post about the meeting between House minority leader Nancy Pelosi and Senate minority leader Chuck Schumer. Notably, Pelosi had been sitting at a table of 11 as the only woman.

At one point, Commerce Secretary Wilbur Ross asked, “What exactly does the president get out of this deal?” As Pelosi, the only woman at the table of 11, tried to make her point — that the president gets the cooperation of the Democrats, which he will likely need on a host of issues — the men in the room began talking over her and one another.

“Do the women get to talk around here?” Pelosi interjected, according to two people familiar with the exchange.

There was, at last, silence, and she was not interrupted again.

Being interrupted, spoken over, and often sidelined for women in politics, offices, classrooms, and almost everywhere is an everyday facet of life for women, so much so that it often goes unnoticed. At this stage in her career, Pelosi has found her voice and has the political footing to make it heard. But what about other women?

The disrespect ranges from explicit things like Washington Rep. Pramila Jayapal  being called a “young lady” who “doesn’t know a damn thing” by one of her old, white male colleagues after Jayapal tried to talk about a spending package, to more implicit things, like how 60 percent of all comments made about abortion on cable television were made by men (and 64 percent of all comments were inaccurate).

In the same vein, threats of rape and violence have become commonplace for women in politics, sometimes by online trolls, and sometimes by male politicians who challenge them to duels to the death over their voting records.

Most recently, despite constantly cheering for free speech when it comes to Milo Yiannopoulos‘s right to preach of the inferiority of African Americans, the alt-right and even people across party lines collectively share in attacking and chastising former Democratic nominee Hillary Clinton for speaking up for her experiences in 2016 in her new memoir, What Happened.

Clinton is a woman who worked in public service for decades only to watch the likes of Donald Trump, a man who’s boasted of sexual assault and mocked prisoners of war while consistently spewing out wildly ignorant speech, ride overt racism, sexism and deceit win the presidency. But her insights and reflections on her direct experiences are unwelcome, all while we welcome the insights and reflections of mere observers of her experiences.

Sexism toward women in politics might not silence seasoned veterans like Pelsoi, a hard woman who’s served this country for decades. But it could have the consequence of silencing younger women in public service, or maybe dissuade them from entering the field altogether. Sexism is an unequivocal challenge to the free speech and representation of women, and the longer we focus on whether or not Yiannopoulos or Ann Coulter ought to be allowed on campuses, the more we delay in finding a solution to a very real issue.