Nancy Pelosi Is Very Powerful, But Not Very Popular
video

Nancy Pelosi Is Very Powerful, But Not Very Popular 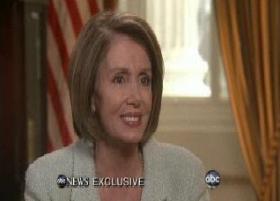 Speaker Nancy Pelosi is riding high after Congress finally past the health care bill over the weekend, and she sat down with ABC World News anchor Diane Sawyer for an exclusive interview last night.

However, while she talked about her power, new polls show her popularity reaching all-time lows.

Sawyer spent the majority of the interview talking health care, she also asked Pelosi about power. She quoted an Economist article which called her “arguably the most powerful woman in American history,” and a Brown University professor who said she is the “most powerful Speaker in 100 years.”

Sounds good. I don’t take it personally, except I take it as a compliment for all women. Because as the first woman I certainly wanted to demonstrate we could get a job done that has eluded others for a century.

Diane Sawyer didn’t ask how popular Nancy Pelosi was, they asked about power…There are very few women who match up to Nancy Pelosi in terms of historical import.