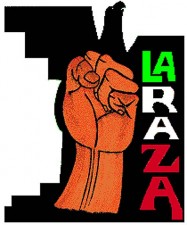 The song, which is still up on the site, name-checks the National Council of La Raza, so we contacted them to find out their reaction to this little cup of racist cheer.

In case you missed it, here’s the song again:

I spoke with NCLR Vice President Lisa Navarette, who hadn’t heard the song yet but didn’t seem very surprised. Her reaction? “(with a deep level of sarcasm) Charming.”

“Talk radio is talk radio,” she continued, “that goes without saying, but the fact that this appears on the Human Events website belies their claim to be colorblind when it comes to immigration.”

Navarette went on to say that La Raza would be contacting Talk Radio Network and Human Events to see about getting the song taken down, but didn’t hold out much hope for Human Events. “This isn’t the first time they’ve engaged in this kind of vile scapegoating of the Latino community. We’ll probably contact Human Events to see if they’ll take it down, or explain themselves. I’d be really interested to hear what they tell you.”

I struggled to find an interpretation to the song that wasn’t racist and couldn’t. I understand that not all (or even most, in my view) who are opposed to illegal immigration are racist, but whoever was responsible for this song has at least some subconscious race issues with Hispanics. It’s especially offensive because it doesn’t even come close to rising to the level of clever or funny; it’s just mean-spirited racism for the sake of racism.

I think, quite frankly, that it’s embarrassing for it to have appeared at Human Events. I really don’t know who’s responsible for it being there, but I believe they displayed a horrible lack of judgment. I think in any organization I have ever worked for, anyone who published or promoted such work in their official capacity would have been fired or issue some sort of groveling apology coupled with a leave of absence. I think the fact that Human Events has offered no explanation or retraction, or even offered to take the piece down after several days, amounts at the very least to gross negligence.

At the very least.