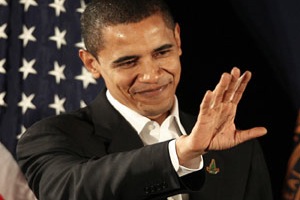 The National Enquirer, which published a report this morning that “investigators are attempting to obtain a tape” that proved an illicit rendezvous between President Barack Obama and former US Senate campaign staffer Vera Baker, has updated their story this afternoon to retract the claim that there is video evidence of the affair with the alleged testimony of an anonymous chauffeur.

Looks like the National Enquirer Obama sex scandal is unraveling rather quickly. The latest from the paper is that “An Enquirer reporter has confirmed the limo driver’s account of the secret 2004 rendezvous.” The limo driver allegedly in the know about the affair is not a new piece of their puzzle– that claim was there last night– but in the absence of the video evidence of ambiguous age, which was the center of their report and would have been the one thing to lend them any credibility, the limo driver is the core of the story.

This clarifies that they are trying to uncover a 6-year-old maybe-affair with a testimony from the same time period, and that, rather than having footage, they just have one first-hand account of someone driving Baker to a hotel, where the President may or may not have been. The Enquirer has not made clear the changes other than adding the word “update” to the body of the report.

This also shifts the weight of the article from the story of the affair itself to the fact that, apparently, someone out there is “offering more than $1 million to witnesses to reveal what they know about the alleged hush-hush affair.” Why? If it indeed happened six years ago, and no one brought it up during Obama’s presidential campaign, what use is it now, halfway into his first term? The obvious go-to answer is that this could energize the far-right in time for the 2010 elections, but once it is revealed who perpetuated the rumors, true or not, about a story so aged, the tactic could easily backfire.

Truth or not, the story proved to be the first major test for the tabloid since it accurately reported the John Edwards affair, which restored public faith in the tabloid and resulted in the reaction to the story we saw last night. The major publicity that they elicited from that proved their one powerful foray into journalism was enough for the media to react with slightly more respect this time around given the subject at hand, and that was the reason the report surfaced here– not that the Enquirer published it, but that it had the journalistic capital, so to speak, for such a wild story to demand attention. As a news and media analyzer and curator, its our mission to report stories that are being reported. A story with this type of dubious, paper-thin accusation wouldn’t normally make the cut, but when a newly respected gossip forum reports it– and the story is reported solely because of the tabloid’s new reputation– it’s news in the media industry.

Unless they can pull out the kind of irrefutable evidence they found for the Edwards case, the Enquirer will return to their previous reputation as a salacious provider of specious rumor and innuendo, a stark difference from their recent placement alongside titles considered for a Pulitzer.