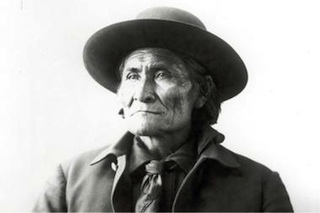 Hey, remember when America killed Osama bin Laden and we were all happy for like 20 minutes? That was nice. Anyway, the latest in the long line of people who are totally over that whole Bin Laden dying thing appear to be Native Americans. The official code name for the mission to capture Bin Laden was “Geronimo,” the name of the famous Chiricahua Apache leader. Depending on who in the White House you ask, that may have been the codename for Bin Laden himself. Apparently, Native Americans aren’t entirely thrilled to have one of their heroes be lumped together with one of the worst human beings who ever lived. How touchy.

“In a triumphant moment for the United States, the moniker has left a sour taste among many Native Americans.

‘I was celebrating that we had gotten this guy and feeling so much a part of America,’ Tom Holm, a former Marine, a member of the Creek/Cherokee Nations and a retired professor of American Indian studies at the University of Arizona, said by phone Tuesday. ‘And then this “Geronimo EKIA” thing comes up. I just said, “Why pick on us?” Robert E. Lee killed more Americans than Geronimo ever did, and Hitler would seem to be evil personified, but the code name for bin Laden is Geronimo?’”

You can see where they’re coming from. After all, it’s no question that Native Americans have been treated horribly by European-descended Americans throughout history and our nation’s continued love of stuff like this would make anyone wary of how a respected name is being used. That being said, military code names are purposefully chosen to not have easily identifiable names. And, when one woman in the article is quoted as saying this demonstrates the deep-seated American idea of the “Indian as enemy,” one can’t help but want to remind her that this mission was about going into a Muslim country and capturing a Muslim man who led a bunch of extremist Muslims in killing Americans. I don’t think it’s really the Indians that need to worry about being viewed as the “enemy.”

But still, America has given Native Americans plenty of good reason to be sensitive. So maybe this should just go to prove that, even when you’re taking out an un-repentent mass murderer, it’s impossible to please everyone.

For the full Washington Post story go here. For an article on how the military chooses its nicknames as well as the fascinating history of Geronimo (real name “Goyathlay”), check out the Christian Science Monitor here.