NBC: Andrea Mitchell Wasn’t Saying That Iowa Is ‘Too White’ To Matter [Update] 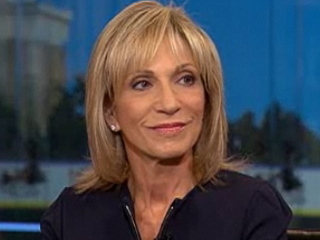 Yesterday, we told you how NBC’s Andrea Mitchell had reported that “the rap on Iowa” is that the state is “too white, too evangelical, too rural” to accurately reflect the nation as a whole when it comes to voters.

The comment prompted a fair bit of discussion and criticism. Last night, for instance, Bernard Goldberg expressed something like distaste for the observation, telling Fox News host Bill O’Reilly that the mainstream media would never say, for example, that “South Carolina is too black.”

Now, as The Atlantic Wire reported this morning, the network is clarifying Mitchell’s statement and addressing the criticism (which came, primarily, in the form of accusations of editorializing) that stemmed from it. Here’s what NBC spokeswoman Erika Masonhall had to say:

That line was part of her report from last night’s “NBC Nightly News” on why Iowa does matter. As Andrea mentioned, when she said “The rap on Iowa…” she was referencing critics who argue that the state shouldn’t carry so much weight because it doesn’t proportionally represent the rest of the country. She then interviews analysts and Iowa voters who explain why the state is so important in the election cycle.

The discussion surrounding Mitchell’s comment points to an interesting time in the news industry, when reporters are almost expected, by the more jaded among us at any rate, to inject their own points of view into their coverage, even while we stand at the ready to call them them out and admonish them for it. (Which, admittedly, can comprise about 93.2% of the fun of watching certain news programs.)

In its write-up, The Atlantic Wire contrasted my reaction to those of others weighing in on Mitchell by describing me as a “less partisan observer.” (For the record, I’m pretty partisan. I just tend to save it for columns and the Thanksgiving table.) But that’s what happens when we observe, isn’t it? We view through a lens. Indeed, so much of the information we consume is filtered through the (sometimes clearly and openly, sometimes less so) biased and even agenda-laden viewpoints of bloggers, reporters, editors and talking heads. It’s not so much, perhaps, that we expect the news media to tell us what to think, but we do anticipate it to have a bias. (Unless we agree with that bias, of course. Then it’s truth.)

Was Mitchell editorializing in what was expected to be a straightforward news report? I don’t think so, personally. While what a reporter chooses to say or leave out of a report may certainly reflect a bias, I read Mitchell’s comment as merely providing a framework on which to hang her findings. She was providing context, background and maybe even a little bit of seasoning to demonstrate how some view Iowa versus the reality of the state. And while I didn’t take away that Iowa is, necessarily, “so important in the election cycle,” the report did reflect that it played a role that is unique and noteworthy exactly because of the discussion and disagreements surrounding its role in the election process.

Update: Exciting! Bernie Goldberg, whom I referred to and quoted earlier in this post, took to our comments section to offer his reaction to my analysis of his statements regarding Mitchell. (And, yes, Mediaite verified that it was indeed Mr. Goldberg himself, and not someone in Golbergian costume.)

Mr. Goldberg took issue with my having described his comments as expressing “something like distaste” for what Mitchell had said during her report, specifically when she characterized “the rap on Iowa” on the state being “too white” to accurately represent American voters.

Here, for your reference, is what Goldberg had to say:

Alex Alvarez writes that I “expressed something like distaste” for Andrea Mitchell’s comment on NBC that “the rap on Iowa” is that the state is “too white, too evangelical, too rural.”

Where Alvarez finds my distaste is way beyond me.

I was on Bill O’Reilly’s program on FOX when he asked what I thought of Ms. Mitchell’s comment. I said I thought she was “absolutely, 100 percent correct.” I further said that “everything” she said in a sound bite Bill played on the air was correct. I even said that some conservatives think this is an example of media bias, “but it isn’t.”
From this Alvarez concludes that “I expressed something like distaste” for Ms. Mitchell’s observation. Really?

As an afterthought, I said that despite the fact that she was completely right, you won’t find any mainstream journalists saying South Carolina is “too black.” Alvarez quoted me correctly on that one. But that’s about the only thing he [Ed. note: Mr. Goldberg later wrote back to us noting he’d found that I am, indeed, a “she” and not a “he.”] got right pertaining to me.

How can a commentator be so sloppy? Here’s how: It’s a safe bet he didn’t watch me on The Factor, that he didn’t hear a word I said on that program and that he didn’t even take the time to watch a video of the show. It’s also a safe bet that he read something somewhere on the Internet that characterized my comments as unfavorable to Ms. Mitchell, so he ran with it. Nice going, Alex! This gives sloppy a bad name.

Let’s be clear: This isn’t simply my “version” of events. This is precisely what happened. Mediaite owes me and its readers a formal “clarification.” I understand that commentators are entitled to give their opinion, but even commentators have to be fair. Alex Alvarez wasn’t. He got it wrong and now he and his editors — if he has any — need to make it right.

Mr. Goldberg, I did watch you on The Factor prior to writing my commentary. In fact, I linked to a video of your appearance in this very post, immediately after quoting you, so that our readers could listen to your exact statements for themselves and, thus, have all the context and information they’d need to come with their own conclusions.

While I welcome and thank you for your comments and take these into consideration, I stand by my original analysis of your response as I read it when I was putting together this column. If, as we agree, Mitchell was not expressing a bias but, rather, providing context when stating that the “rap” on Iowa was that it was “too white, too evangelical, too rural,” why then bring up the idea that one “won’t find” a journalist characterizing, say, South Carolina as being “too black” to provide an accurate depiction of our country’s voters? If this was an issue of context and a multi-layered look at a voting population’s culture and background, why then focus on the racial aspect of Mitchell’s comment? It wouldn’t have been any more or less incorrect or inappropriate had she described, say, Miami as being “too Latino” to offer accurate representation, or perhaps Chicago as being “too Catholic,” or New York City’s Manhattan as being “too urban.” She’s discussing statistics, not making a value judgment. Why would a journalist not also refer to statistics when it comes to black voters? That you mentioned race (even as an afterthought) showed, to me as a viewer and a commentator, that you found something, yes, “like distaste” for her having specifically included race in her characterization of Iowa.

If you believe I misrepresented you in my analysis of your comment, well, then, I do apologize. That was never and would never be my intent. What you meant to say was evidently distinct, as you’ve noted, from how I interpreted your comment.

And, once again, I thank you sincerely for taking the time to weigh in.