NBC’s Chuck Todd Blasts Stephen Colbert: ‘He Is Making A Mockery Of The System’ 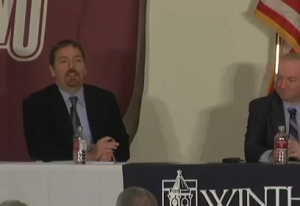 Appearing at a Winthrop University panel Thursday, MSNBC host and NBC White House correspondent Chuck Todd ripped into Stephen Colbert and his not-yet-official run, suggesting that Colbert might have some ulterior motives in the way he’s almost throwing his hat into the GOP primary ring:

“Is it fair to the process? Yes, the process is a mess, but he’s doing it in a way that it feels as if he’s trying to influence it with his own agenda, that may be anti-Republican. And we in the media are covering it as a schtick and a satire, but it’s like, ‘Well wait a minute here…’ he’s also trying to do his best to marginalize the candidates, and we’re participating in that marginalization.”

Todd said that the “mainstream media” (his quotes) has a responsibility to exercise some caution and question what Colbert’s agenda is. “Is it to educate the public about the dangers of money in politics and what’s going on?” He asked, “or is it simply to marginalize the Republican party? I think if I were a Republican candidate, I’d be concerned about that.”

While expressing admiration for how Colbert has exposed a lot of the idiocy involved with the marriage of politics and money, and saying he enjoys his show, Todd went after both Colbert and Jon Stewart for mocking members of the media, then backing off and saying “we’re just comedians” when the members of the media call them out on it. “Actually, no you’re not [comedians] anymore,” Todd said. “You are mocking what we’re doing, and you want a place in this, then you are also going to be held accountable for how you cover and how you do your job.”

Watch the clip below, courtesy of Winthrop University’s YouTube channel.