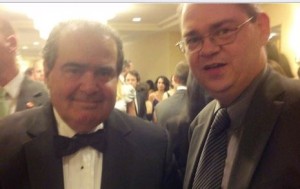 Washington, DC is often referred to as “Hollywood for ugly people,” but for at least one night of the year, we are Cinderella, and Hollywood’s collective Prince Charming stalks us with a glass slipper (and a Dothraki horde of photographers). In recent years, the White House Correspondents Dinner (or “Nerdprom,” as everyone calls it, even though they hate the name) has become a feast for celeb-watchers and wonk-worshippers alike, and while this year’s wattage slipped a little from previous years, the bedfellows were as strange, and interesting, as ever. Anyone with a cable box can watch President Obama and Conan O’Brien yuk it up, but we take you where C-Span fears to tread: inside the open bar and finger food-fueled pre- and post-parties.

– RELATED: The Best And Worst Dressed Celebs At The White House…

This year, as in previous years, I was a guest of CNN for the pre-dinner reception, which was as jam-packed as ever. However, I did see fewer of the colleagues that I usually catch up with at these things, and I believe this is the first event of any kind at which I did not run into Mike Calderone. Things were better, on that front, at the MSNBC After Party. Both featured only the finest in finger-foods and open bars, but MSNBC had the added perk of Rachel Maddow behind the bar once again. Highlights of the night included my first-ever meeting with a Supreme Court justice, a photo-op with former Breaking Bad baddie Giancarlo Esposito, a brush with Hammer Time greatness, and catching up with good friends, over free drinks and cigars. Check out the slide show for more photos and notes on the festivities: