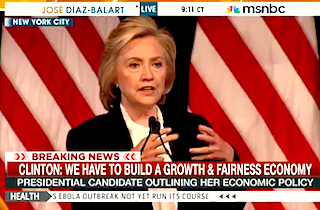 Prohibitive Democratic frontrunner Hillary Clinton gave an address on economic policy at Gotham’s New School Monday morning. You would think this would entail a fair amount of cable news coverage, as it was not that long ago the political press was decrying Clinton for running an insubstantial campaign void of policy specifics.

You’d be wrong. CNN and Fox News skipped* the speech entirely, while MSNBC ran only her introductory remarks before cutting away to commentary on it. CNN even found time to replay David Letterman’s Trump Top 10 bit, a clip several days old at this point, instead of Clinton’s speech on the likely central issue of the 2016 campaign.

I know what you’re thinking: did these networks at least wonder what was in the speech while not covering it?

They did! Fox’s Ed Henry appeared stymied as to how Clinton would argue for improving wage stagnation given her own personal wealth. (That the two are incompatible was an unspoken premise.) But instead of then turning to Clinton’s remarks, Fox switched to analyst Brit Hume’s commentary on Donald Trump — which, in fairness, he hadn’t aired since yesterday. (Later story: baby gets glasses.)

Meanwhile on MSNBC, former RNC chair Michael Steele asked: “I’m curious as to which definition of investment she’s going to use,” then wondered aloud about how Clinton would prioritize various hypothetical economic trade offs. If only there were a way to find out.

* The speech was available on a variety of livestreams, if that’s your thing.